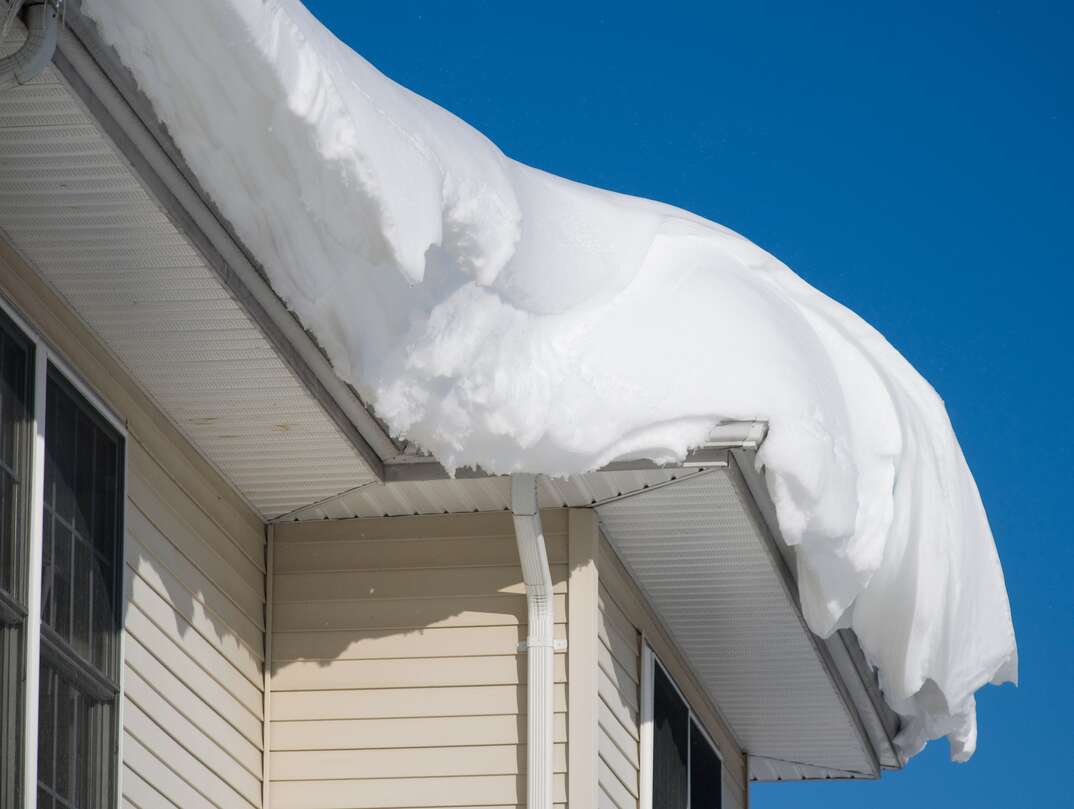 If you live in the northern U.S., you know there’s not just one kind of snow. There’s the powdery stuff, which skiers and snowboarders love. Toward the end of winter, you get that gray, slushy mess that’s no one’s favorite. And then, occasionally, there’s wet, heavy snow that’s great for building snowmen.

This May Also Interest You: How Much Is Too Much? Here’s a Guide to How Much Snow Your Roof or Deck Can Hold

According to the Weather Channel, this type of snow is so heavy because it has a low snow-to-liquid ratio — meaning that there’s a lot of water compared to the volume of snow. It usually forms during early- or late-winter storms when the temperatures are warmer as the snow falls, allowing flakes to melt.

This makes it the perfect consistency for packing snowballs. But if you’re trying to remove that wet, heavy snow from your roof or driveway, it can quickly become troublesome. Here are a few tips and tricks you should keep in your back pocket this winter.

You may not think of shoveling as a strenuous activity, but it can be. According to the Cleveland Clinic, the hard work of scraping and throwing snow can put some individuals at risk for a heart attack. It can also aggravate or produce lower back pain. Plus, there’s always the risk of slips and falls.

Because wet snow is so heavy, you have to exert even more force while shoveling. To avoid injury, the Cleveland Clinic recommends taking frequent breaks, working with others and staying hydrated while you shovel.

The name “snowblower” implies that the device can easily manipulate snow. But wet snow is hard to move — even for a piece of machinery. Trim That Weed says that clearing the snow as soon as it falls, lubing the chute and working slowly can help. However, the most important thing is having the right kind of snowblower.

With single-stage snowblowers, the auger both picks up and expels the snow. For that reason, they’re best for shallow snowfalls and lighter types of snow. A two-stage snowblower is going to be a better buy if you often have to remove deep or heavy snow. This style has an auger that pulls snow up and an impeller that throws snow off to the side.

Look Out for Ice

According to AccuWeather, wet snow — due to its high water content — is also likely to accumulate an ice layer underneath. So, in addition to shoveling or blowing snow off your driveway, you might also need to de-ice. Sprinkle kitty litter, sand, salt or a store-bought ice melt on areas where you drive or walk.

Don’t Forget About Your Roof

Your roof is strong, but it’s only designed to hold so much weight. The New Jersey Roofing Network says most roofs can hold 20 pounds per square foot of snow before they become stressed. Your roof may be able to handle up to 4 feet of the light, powdery variety. But because wet snow is so much heavier, your roof may experience stress under 1 to 2 feet of snow. Signs of an overloaded roof include creaking and cracking sounds, warping and water stains on the ceiling.

Avoid climbing up on the roof where it may be slippery. Instead, use a roof rake to clear as much snow as you can.

If it’s really coming down out there, you may also want to keep an eye on your deck. Most decks can withstand about 40 to 60 pounds of snow per square foot, depending on the building codes in your area.

Heavy snow can accumulate on all kinds of surfaces. Trees may bend or break under the weight, taking out power lines if they fall. In this case, you may be without power until the line can be repaired. Ideally, you would have prepared for an outage before the storm starts, but here are a few things you can do if the lights are already out: