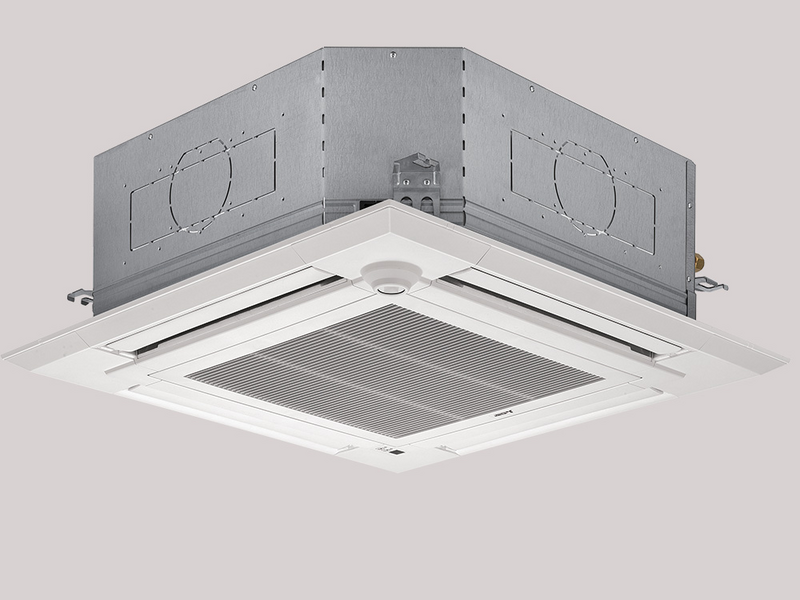 This May Also Interest You: Hot or Cold in Your Household? Split the Difference With a Mini-Split Air Conditioner

Unlike ductless mini-splits that have all their components on the wall unit, a concealed duct mini-split uses ductwork to circulate air throughout the home from an air handler located in a hidden area like an attic or crawl space. They offer the same control that ductless units do, allowing you to create distinct zones throughout a home that can be cooled separately.

Concealed duct mini splits are a more efficient option than central air conditioners because they require less ductwork to push cooled air throughout the home. The zones allow homeowners to cool different areas to suit their needs, which conserves energy. A concealed duct mini-split provides zoned cooling without the need for a unit in each room, but this will vary based on the size of the home.

There’s no real resolution to the ducted vs. ductless debate because each is appropriate for different living situations. If you're more invested in aesthetics, a concealed ducted option is the right choice for you. Mike Hudson, service and install manager for Nice Heating & Air in Northern Virginia, says ducted systems tend to have stronger airflow than their ductless counterparts. If you live in a humid climate, ducted systems are also preferable since they’re more proficient at removing excess moisture from the air.

One benefit of ductless units is that they're easy to add onto if you need to add more cooling to a space. They don't need air ducts, so they're less invasive to install and are well suited for homes that don't have existing ducts. Ductless systems are also less likely to move dust throughout your home, so a ductless system could be a potential solution if air quality is a concern.

Overall, the majority of homes in the U.S. use some form of ducted system for cooling — like central air — but many do not get the efficiency advantages that usually come from ductless mini-splits. A concealed duct mini-split can use your existing ducts while providing a more efficient zoning option.

What Are the Costs?

If you’re installing concealed duct min split air system, Hudson says you can expect to pay anywhere from $2,500 to $7,500, which includes the system and labor. Central air is not far from that same price range, but there are many contributing factors like size of the system, efficiency, labor costs and more that can drive the price up or down. If you’re looking to save, a lot of companies offer discounts during the off-season.

While you might consider saving on labor costs by installing it yourself, it might not be the best idea. Professional HVAC contractors are trained to properly assess your home, find the right sized system and install it to factory standards — all of which you won’t get if you do it yourself. If you get it wrong, it can affect the efficiency of your system.

Other Things to Consider

While an HVAC contractor can help you figure out what system to choose, it’s not a bad idea to know what goes into choosing one. Here are some critical features to take into consideration when picking a ducted mini-split air conditioner for your home:

British Thermal Units (BTUs) represent the cooling power of air conditioning units. The larger the area you’re trying to cool, the more BTU power you will need. As a rule of thumb, at 150 square feet, you can expect to need 6,000 BTUs. For every additional 150 square feet, add 1,000 BTUs. This should only be taken as a general rule since other things affect the coverage, like how insulated the area is and how much sunlight it receives.

You can install these air conditioning units in different rooms, closets, attics and crawlspaces. Because they use ducts, they can cool multiple rooms, so where you install them isn’t as important as it is for other types.

Each ducted mini-split system will also have its own energy efficiency rating, also referred to as SEER. The higher the rating, the more energy-efficient the model. The current federal regulations state that an HVAC system should have a SEER rating of 13 at the minimum. However, according to new federal regulations starting in 2023, the minimum SEER ratings in HVAC systems shouldn’t be less than 14 if you live in a northern state and no less than 15 if you live in the South. Units that are Energy Star-rated offer the most energy efficiency.

Are They Worth the Money?

While it depends on the goals of the homeowner, concealed duct mini-split air conditioners are certainly worth the money in certain circumstances. If aesthetics matter a lot to you, you can’t go wrong with concealed duct mini-split systems. The benefits of a zoned system that works efficiently are an excellent solution for your home. They share similar costs to central air conditioners but offer more energy efficiency, which translates to money saved on bills. However, if you have a large home, central air conditioners are often better equipped for cooling it.