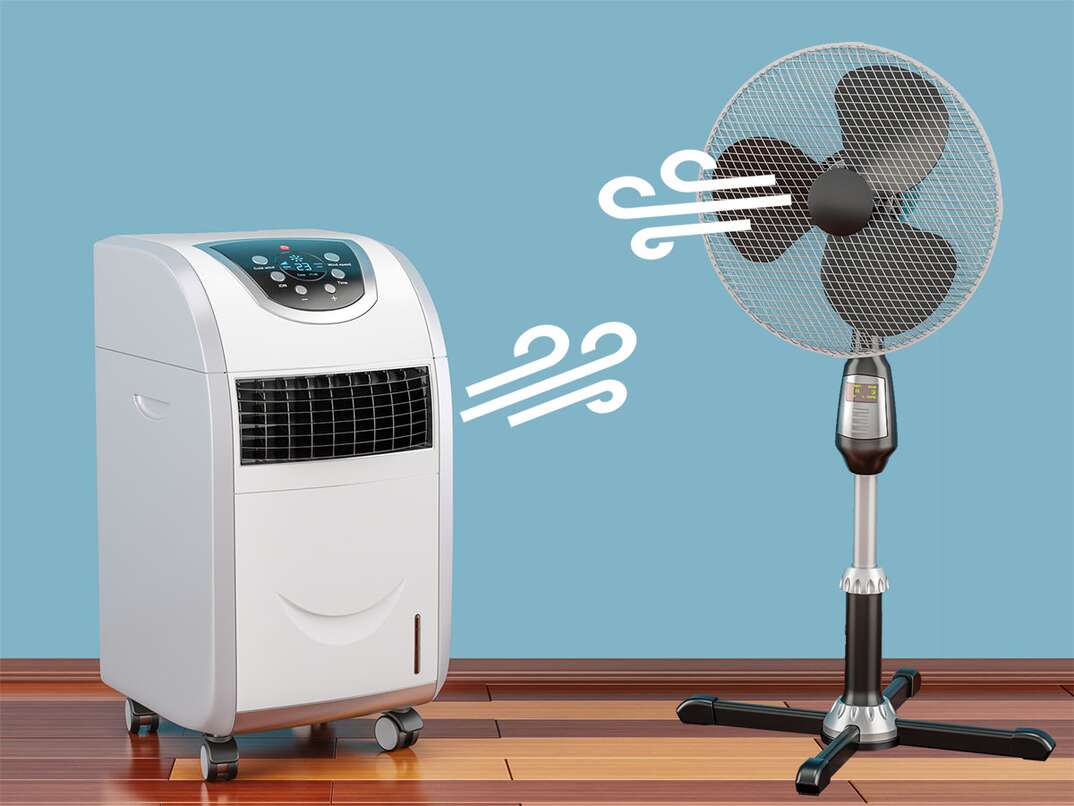 There's nothing worse than that hot, sticky feeling you get as the temperature rises. And even if you can make it through the heat of the day, many people struggle to sleep comfortably without a cooling system. Air conditioners are a popular way to stay cool in hot weather, but they're expensive to install and run. Portable models are a cheaper alternative.

This May Also Interest You: Hot This Summer? Here’s Everything You Need to Know to Keep Cool

You may have also seen so-called “cooling fans” on the market. Many homeowners are curious whether these cooling fans are an effective alternative to a portable AC. We've laid out some of the key differences to help you decide what’s best for your home.

What's the Difference Between a Cooling Fan and an Air Conditioner?

The primary difference between a cooling fan and an air conditioner is that fans — even cooling fans — simply move air around the room, while an AC unit actively cools it. Fans can make you feel cooler because they encourage moisture from your skin to evaporate. However, they don't actually change the temperature of the room. Air conditioners draw moisture from the air to reduce its temperature.

Which Is Better for Cooling a Room: A Cooling Fan or Air Conditioner?

In hot weather, an air conditioner is by far the best option to cool your room down because it reduces the air temperature. While a cooling fan may make the heat slightly more bearable, it won't be able to contend with the hottest summer days.

Is There a Fan That Works Like an Air Conditioner?

There aren't any fans that work exactly like an air conditioner because they don't have the ability to draw moisture from the air. However, you can get powerful tower fans or extra-large fans that deliver a much stronger breeze than a regular household fan and are much cheaper than air conditioners. Although they won't cool the air like an air conditioner, the strength of the air current should still provide some relief from the heat. Ceiling fans are another good option if you want something powerful enough to circulate air around the entire room.

How Effective Are Portable Air Conditioners?

A portable air conditioner will cost you less upfront than a central air system, but its effectiveness depends on a few factors. First, consider the temperature range where you live. A portable air conditioner will probably cool the room down adequately in warm weather but may not be able to contend with the most scorching days if you live in a particularly hot climate.

You should also think about the size of your room in relation to the size of your portable AC unit. A portable unit isn't as powerful as a regular AC. While it will cool down a small room reasonably well, it may not be effective in a large living space.

Finally, consider the cost of running each unit type. Although you won't pay as much for a portable AC at the point of purchase, you'll end up spending a lot more on electricity to run it if it's struggling to cool a large room in very hot weather. Homeowners living in hot climates or with large homes may find an installed air conditioning system more effective and economical long term.