How to change a Door Knob 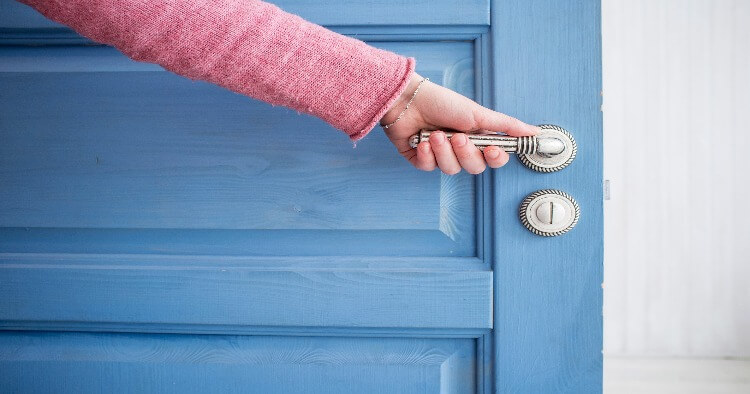 There's no question that I love being a homeowner. My days of being a renter of an apartment or in a condominium are long behind me and I’m so happy. (I wouldn't trade it for the world.) At the same time, adulting (and homeownership) means that I'm in charge – in charge of upkeep, maintenance and all the other things that go along with owning a home (can you say mortgage?)

When major repair issues arise, I leave them up to the professionals. But in the interest of being money-conscious, I try to handle small tasks on my own. Like when the old doorknob on my front door started loosening, and was literally about to fall off - I detached and replaced it. 1-2-3, easy peasy!

Here’s how to doorknob DIY repair:

On the nature of doorknob appearances

Start by asking a few simple questions: Are you replacing a doorknob because you have to, like I did, or as part of a broader home renovation - in other words, changing out a number of different doorknobs?

Before taking the knob off of any door, check to see if it has matching counterparts elsewhere in the house. If so, be sure to locate the same doorknob model and design used on the others, or something that looks to be almost identical. If this isn't the case, then it doesn't necessarily matter what the new knob looks like, as long as it isn't totally out of sync with the overall appearance of the door.

You've got to ditch the old before you can bring in the new - with doorknobs as well as a lot of other things in life. Let's review the critical steps of knob removal as outlined by DIY Network:

Pretty easy, especially compared to changing a screen door. In the event your doorknob has hidden screws, follow Hunker.com's instructions:

Hold onto the old knobs and screws for the moment. You'll need them when you take the next step: visiting the local hardware store to buy a replacement knob, as Better Homes and Gardens notes. Even if you aren't going to be changing all of the knobs for stylistic reasons, you still want to make sure you buy the right size, so take it with you.

Trust me on this one: When I had to replace my doorknob, I thought I had the perfect shape by eyeballing. WRONG. Not an issue of cost - even a nicer residential knob maxes out at around $30 or $35 - but wasting the time and effort was incredibly frustrating. Also, you'll have to buy a new latch and plate that fits perfectly with the replacement knob.

After you've selected and bought your new doorknob and brought it home, there are just a few more steps, all of them simple:

For household maintenance issues, you can be prepared for breakdowns. Look to plans from HomeServe to help with the cost of covered repairs.