Never Flush These 11 Things Down Your Toilet 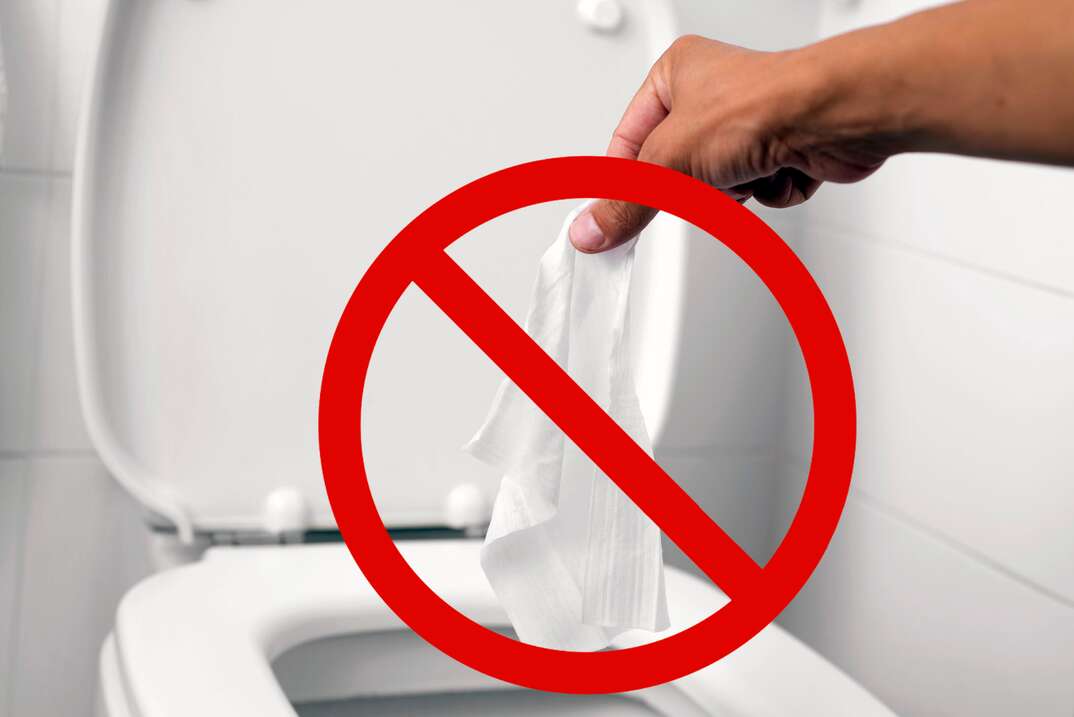 We all put things down our toilet that aren’t exactly supposed to be there — whether out of convenience or ignorance. But you should know that your habit of flushing cat litter or Q-tips might be harmful to both your house’s septic system and your city’s sewer system.

This May Also Interest You: How to Fix a Clogged Toilet

When you flush your toilet, the wastewater drains into your pipes, then into the city sewer system or your septic tank. Items that don’t belong in your pipes can create massive clogs, which could result in your septic system backing up into your home. In severe cases, New York City’s Department of Environmental Protection says trash can clog citywide sewer pipes and damage the equipment at wastewater treatment facilities.

Say it with us: “My septic system is not designed to handle anything other than human waste and toilet paper.”

In theory, that makes sense. But there are still so many things that seem flushable. These are some of the most commonly flushed items — and the reasons why you should keep them out of the toilet:

This one’s kind of a paradox: Almost everything labeled “flushable” shouldn’t be flushed. According to Templeton, Calif.’s Water Conservation Department, “flushable” only means that an item can be flushed without clogging the toilet. But that’s not a good metric by which to judge whether something will be harmful to your septic system or your city’s sewer system. Most so-called flushable items — wipes, diapers, seat covers and cleaning products — don’t break down completely, which can cause clogs later on.

Bathroom waste often gets chucked into the toilet just because of proximity. After all, the toilet also transports waste from one place to another, right? Avoid the temptation and throw these items in the trash instead:

Tell your kids to stop flushing their bread crusts. According to Mr. Rooter Plumbing, your toilet is not the place for food scraps. Food doesn’t break down the same way as human waste, which means it might end up sitting in your pipes for a while. Scraps like bones or fruit pits will take a long time to break down, and oils and fats will solidify in the pipes.

Have you ever seen a paper towel commercial? You know how the advertiser will show off the strength of the product by using a few paper towels to carry a watermelon (or another heavy object)? Toilet paper commercials rarely feature such a segment because toilet paper is designed to break down as soon as it hits the water. Other paper products — like tissues, wipes and paper towels — are supposed to hold up under the same circumstances. For that reason, they can build up in sewer systems and cause blockages.

While we’re at it, don’t flush newspaper, documents, photos, paper packaging or the cardboard toilet paper roll, either.

According to the Minnesota Pollution Control Agency, flushing pharmaceuticals can harm waterways because wastewater treatment plants aren’t designed to remove these substances from the water. The chemicals in over-the-counter and prescription medications can harm fish and contaminate drinking water.

That said, the U.S. Food and Drug Administration has a “Flush List” of commonly abused prescription medications that have been deemed OK to flush if you can’t locate a drug take-back location.

Flushing a diaper is a one-way ticket to a clogged toilet. Wastewater Treatment Services of Texas says diapers won’t break down in the water. So, even if you can flush one without clogging the system initially, you may have some expensive repairs waiting for you down the line. Baby wipes — though they may pass without a clog — shouldn’t be flushed, either.

Pet fish have long been dignified with water burials — but it turns out that flushing your fish is harmful to more than just your septic system. Sometimes your little finned friend that’s gone belly up hasn’t actually expired, and contrary to what you may believe, your toilet isn’t a direct line to the ocean. This means that your fish may wind up dying in a wastewater treatment plant. Or — as Buffalo Niagara Waterkeeper explains — your pet goldfish might accidentally end up in a local waterway after an overflow, where it’s an invasive species that may harm other wildlife.

If you prefer furry friends, you may have considered throwing their waste in the toilet. According to the Environmental Protection Agency, it’s usually fine to flush doggy doo, as long as it’s not in a plastic bag. It’ll be treated just like human waste.

The same does not apply if you have a cat who uses a litter box. Just take this warning from Supeck Septic Services of Medina, Ohio: “Flushing kitty litter — even ‘flushable’ kitty litter — wreaks havoc on your septic system and can quickly lead to catastrophic, whole-system failure.”

Long hair likes to stick to the inside of pipes. According to American Water, flushing a clump of hair can create a net-like structure that traps other objects, leading to clogs.

Like hair, fingernail and toenail clippings are technically organic matter, but that doesn’t mean they’ll break down in your septic tank. Avoid problems by clipping your nails into the trash can, instead.

Automotive chemicals, fuels, solvents and poisons should stay far away from your toilet, as they can harm your drain lines. According to the National Agricultural Safety Database, these toxic substances can leach into the soil or contaminate groundwater and waterways. To be safe, never pour these things down any household drain, including your toilet: