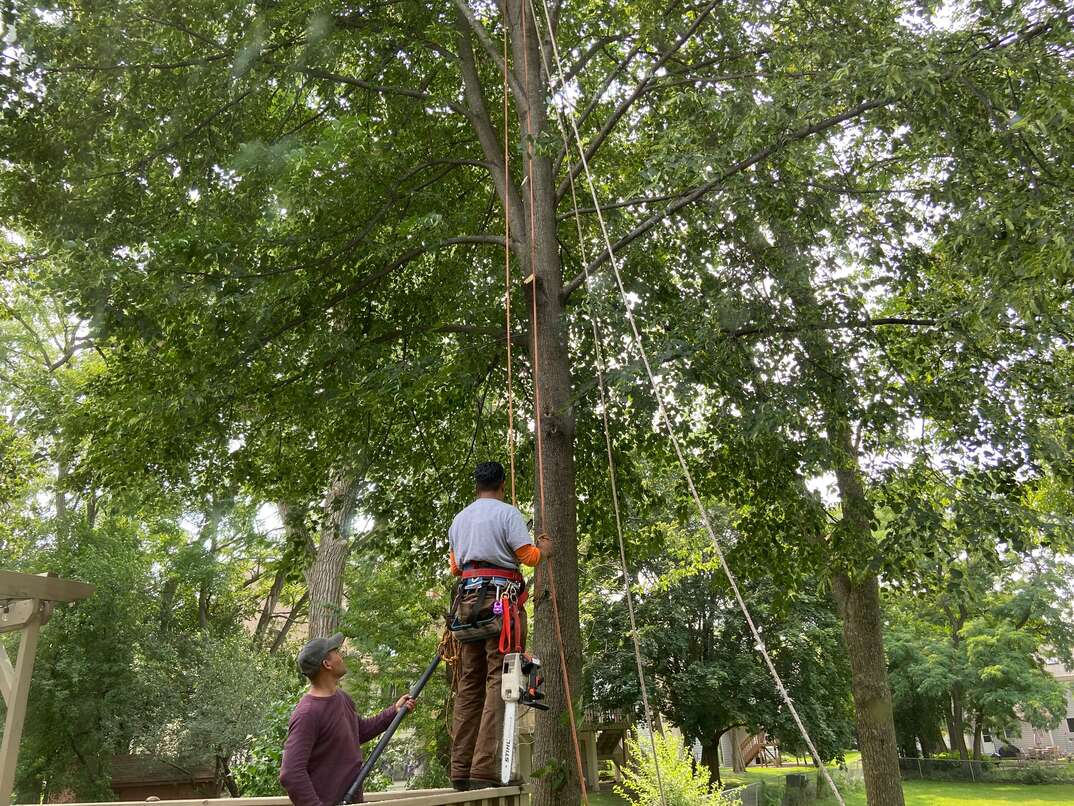 Trimming and pruning are two important tree maintenance tasks that should be done on a routine basis. While some people mistakenly consider these procedures the same, there are clear differences between them that you should know about.

This May Also Interest You: Tree Topping: Why It’s Bad for Your Trees and What You Can Do Instead

While they’re both essential to a tree’s aesthetics, one of them plays a more significant role in the overall health of your plant. They’re also done at different points in the tree’s life. This guide covers pruning, trimming, their differences and the vital role they each play for trees.

What Is Tree Trimming?

Trimming involves removing excess branches to maintain regularity in shape and size for an aesthetically pleasing look. When you trim a plant, it causes the remaining foliage to grow faster and thicker than if the plant were untrimmed. Trimming is most often used to maintain the overall size of a tree or shrub. For example, some homeowners use hedge shears to keep their foundation plantings at the desired height of 3 feet (1 meter) tall. Trimming can also reduce the crowding of plants that have been planted too closely together.

Stephen Webb, founder of Garden’s Whisper, said trimming is usually conducted annually on young trees and shrubs. As trees grow older and taller, more branches begin to form and shade out other areas of the tree. This encourages new growth that will eventually become too large for the tree's structure, leading to structural failure or split wood on larger trees. The frequency of trimming depends on how fast a tree grows and the climate conditions in which it is growing. Generally, deciduous trees (maple, oak, elm and others) will require more frequent trimming than evergreens because they grow much quicker.

Is Trimming Healthy for Trees?

While trimming is beneficial when done correctly, removing too much plant material can harm your tree or shrub. If you remove more than 20% of the foliage in one trimming session, Webb said that you risk damaging your plant. However, in most cases, the plant will be fine after it recovers.

Pruning is the process of removing dead, diseased or damaged branches, as well as shaping and thinning out the plant. Pruning is done to improve the overall health, strength and appearance of the tree or shrub. It helps trees establish a strong structure for growth, which allows them to thrive. Webb said that, without pruning, trees can appear unsightly, may be more susceptible to disease and their size is often restricted. Pruning also improves the sunlight that reaches lower branches, encouraging branching and greater fruit production.

Pruning is done less frequently than trimming, as it usually needs to be done only every two or three years. Pruning is more common with ornamental trees and shrubs than it is with fruit or shade trees. The frequency depends on what kind of tree it is, how fast it grows and what you’re trying to achieve. Most deciduous trees should be pruned every two or three years. Evergreens are not usually pruned as often because they have less growth, but if there are dead or dying branches, it may be necessary to prune them more often.

Is Pruning Healthy for Trees?

Regular pruning is necessary for the overall health and beauty of your tree. Pruning stimulates new growth. It also increases air circulation and sunlight penetration, resulting in a healthier plant that is more resistant to insects and disease. Without pruning, trees can appear unsightly with dead or diseased branches, leading to even more severe problems such as pest infestation and rot.

Differences Between Pruning and Trimming

When it comes to trees and shrubs, the terms pruning and trimming are often confused. In fact, they refer to very different practices with entirely different purposes. There is good reason for this confusion as both typically involve cutting back at least a portion of a plant.

What Kinds of Tools Are Needed to Prune or Trim?

Multiple types of equipment are used for trimming depending on the scale of operation and the size of the trees and shrubs being cut. The equipment used usually consists of hand tools or power tools. Some examples include branch shears — also known as loppers — pole pruners and chainsaws. The most efficient tool of equipment for trimming is manual branch shears. Branch shears are not only efficient, but they are also quick and clean when used correctly.

Tools for pruning include handheld clippers, shears or loppers with blades 6 to 10 inches (15 to 25 centimeters) long. In general, the thicker the branch, the larger blade you need. Pruning equipment can also include saws and chainsaws. In most cases, a chain saw is used to cut off large branches, while shears and loppers are used to prune the smaller branches. Shrubs and small trees can be pruned using handheld shears. The most effective tools for this task are the long-handled loppers, which resemble large, heavy-duty scissors.