The Cicadas Are Coming! 7 Tips to Deal With the 17-Year Cicada 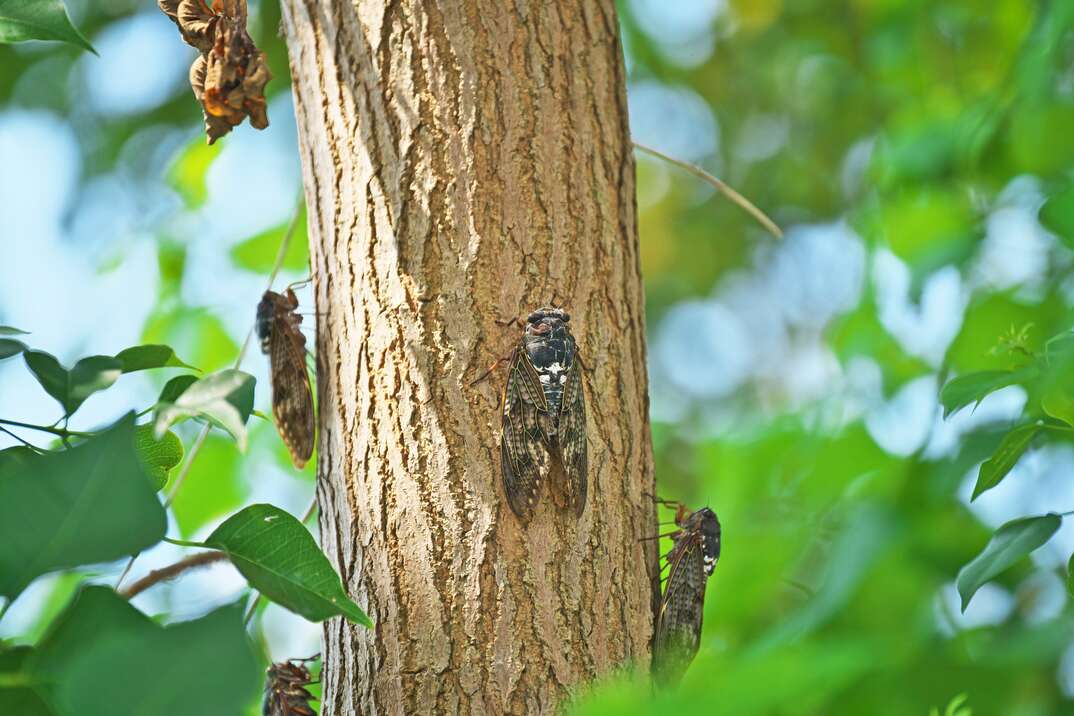 Later this spring, billions of bugs will crawl out of dime-sized holes in the ground after 17 years in the soil. These cicadas will go topside just to mate and die over the course of four to six weeks. Most Americans see a handful of cicadas in their yards every summer, but an emergence like this will be massive in comparison.

This May Also Interest You: Home Maintenance Checklist: 15 Things to Do for Spring

These cicadas are known as 17-year cicadas or periodical cicadas. You’ll know them by their red-and-black color and inch-long, winged bodies. The annual varieties you see every summer only live for three or four years, while periodical cicadas have 17-year lifecycles. They spend almost all those years burrowed as much as 2 feet underground. Some species of periodical cicadas emerge every 13 years.

According to the Penn State College of Agricultural Sciences, periodical cicadas emerge in broods. You may remember warnings of mass emergences in recent years. A different brood surfaces almost every year, each centered in a different area of the eastern U.S. Once out of the ground, cicada nymphs mature, lay the eggs that will become the next generation, then die.

Brood X (with the “X” spoken as “ten”) is due to emerge in 2021 — and in X-tremely large numbers. Some estimate that more than a million cicadas will surface per acre. Comprising three different species of cicadas, Brood X will emerge in parts of several states: Delaware, Georgia, Illinois, Indiana, Kentucky, Maryland, Michigan, North Carolina, New Jersey, New York, Ohio, Pennsylvania, Tennessee, Virginia and West Virginia, as well as in Washington, D.C.

Why Do They Come Out Every 17 Years?

If the 1-million-per-acre figure frightens you, that’s kind of the point. There’s strength in numbers. Periodical cicadas come out as one large, overwhelming brood so no individual is targeted by predators. That way, the maximum number of cicadas can reproduce.

When Will They Come Out?

Cicadas will make their debut when the average soil temperature reaches about 64 degrees. In most of the eastern U.S., cicadas emerge sometime in May. Occasionally, a few cicadas will come out a few weeks earlier than the rest of their brood.

The short answer is no. According to the University of Maryland College of Agriculture and Natural Resources, cicadas aren’t a threat to people or pets. They don’t bite or sting, aren’t venomous and won’t infest your house. The only damage they do cause is to young trees during the egg-laying process.

Why Are They So Loud?

Before you see the cicadas, you’ll probably hear them. To attract mates, males will perch on trees and make that loud buzzing or droning sound. Cicada mating calls are a common noise every summer, but expect the song to be much louder if you live near where Brood X will set up shop this year.

How to Prepare for 17-Year Cicadas

There are no real methods in place to control periodical cicadas. They surface once every 17 years, and they only stick around for a few weeks. Still, their emergence can be a nuisance for homeowners who want to enjoy their outdoor spaces in the early part of summer.

Here are seven things you can do to get ready for their arrival:

2. Track Them With an App

Use the Cicada Safari app created by Mount St. Joseph University to keep tabs on cicada emergence in your area. The app is a crowd-sourced live map of cicada populations. If you see cicadas, you can snap pictures and contribute to the app’s map.

Cicadas split open small tree branches and lay their eggs in them. This can cause a lot of thin twigs to die off. According to the Penn State College of Agricultural Sciences, this isn’t a big deal for healthy adult trees; they’ll survive some cicada eggs, though they may look uglier than usual. Young trees, however, are at risk. If most of a tree’s branches are the right size for cicadas to lay their eggs — usually one-quarter to one-half inch in diameter — they could be severely impacted by the emergence of periodical cicadas.

For that reason, hold off on planting trees until after the cicadas have gone. In the future, try not to plant trees in the six months before a large cicada emergence.

Covering younger trees with fine netting or cheesecloth can protect them from this onslaught of egg-laying insects. Trees under 10 feet tall should be wrapped in mesh or netting before cicadas emerge. Orkin says you can also try wrapping your tree trunks or large bushes with aluminum foil to deter the cicadas. Some garden stores carry sticky barrier tape, which will trap cicadas before they make it up to the tree limbs. Then, you can knock them off with a garden hose.

We’ve already established that cicadas aren’t harmful to humans. They aren’t that harmful to most plant life, either. So, it’s overkill to inundate them with pesticides. Most pesticides take too long to have much of an effect on cicadas, anyway. Their mating and egg-laying window is so short that any pesticide you spray won’t do much to kill them off — they’ll just die anyway. In fact, spraying chemical pesticides may unintentionally harm wildlife that eats cicadas.

Depending on where you live, the swarm may take over your entire yard, patio, deck or other outdoor space. If the cicadas are oppressive in your area, the best thing you can do is just leave them alone for four to six weeks. Stay inside or use screened-in outdoor areas instead.

If you must go outside, wear a hat. Cicadas urinate from where they perch in trees. With so many of them up there, it’s often referred to collectively as “cicada rain.” Ewww!

Some pets love to eat cicadas. It’s usually fine if your dog or cat chows down on a few of them, but according to the American Kennel Club, you should be quick to cut them off. The insects’ hard exoskeletons can be difficult for animals to digest. Eating too many of them can cause an upset stomach, abdominal pain, vomiting and other complications that may require a trip to the vet.