It was 1995 when Richard Kopec came to the United States. He was 18 years old and he started working immediately after arriving on U.S. soil. He walked onto a jobsite in New York City and did his best to communicate to the foreman that he wanted work. He started a career right then and there.
Years passed while he lived in Queens and practiced plumbing and commercial hydronic work. Mr. Kopec got married and co-founded his own plumbing company. That went well until his partner died in a boating accident. He spent a few years working for another Manhattan firm before he and his wife decided to move to quieter surroundings on Long Island to raise a family.
“For a while, I commuted to the city from Long Island, but traffic on the expressway is horrible. I spent half my day driving, it seemed,” said Kopec. “Eventually I got a local job, and in 2007, I got my Master Plumbing License.”
By the time Kopec completed his license, he was working for Keyspan (HomeServe), out of the Farmingdale, NY branch. He was part of the service crew and developed a real knack for high efficiency boilers, even though he wasn’t working on them every day. He started doing most of the company’s condensing product service work, and today, he’s the service manager for Nassau County since 2014.
Stiff competition
Mr. Kopec lives and breathes residential boiler swap-outs. New construction is rare, and so is condensing equipment in his area.
“We remove a lot of sectional boilers and replace them with new cast iron models,” said Kopec. “More often than not, we’re installing the U.S. Boiler Series 2 or Series X-2. It’s a really tough market here, and we’re competing against a lot of cheap alternatives, whether that be product or workmanship.”
HomeServe’s Farmingdale location has 43 service technicians, 10 install technicians, and 20 seasonal apprentices. More often than not, the company’s boiler crews can pull and replace a boiler in less than a day, but on occasion, a job comes along that bucks the norm.
Last fall, the HomeServe team got that opportunity. Serving over 55,000 customers on Long Island, one of them called for service, but their existing boiler was no longer up to the task .The customer wanted a high-efficiency alternative anyway.
The house was about 4,000 square feet, zoned with six hydrocoils in the ductwork and a 119-gallon indirect storage tank.
After a load calculation, the system was designed around a U.S. Boiler Alpine mod-con. Most homes on Long Island call for a 105 or 150 MBH unit, but this home was bigger. They needed a 399 MBH unit. The largest Alpine they’d ever installed up to that point was 210 MBH.
“We use U.S. Boiler products – whether cast iron or condensing – for a number of reasons,” said Kopec. “The support we get from Venco Sales is great. More importantly, the efficiency provided by the Alpine is pretty amazing considering the simplicity of the unit. In my little experience with the K2, this holds true across the U.S. Boiler condensing line. And then there are things you find on the Alpine and K2 that aren’t common among other condensing boiler brands. For example, the control board is above the wet components. You’d think that would be common sense.”
On day one of the project, the two-man boiler crew tore out the old system. A subcontractor was hired to line the chimney with flexible polypropylene vent. Combustion air was delivered through the basement wall. 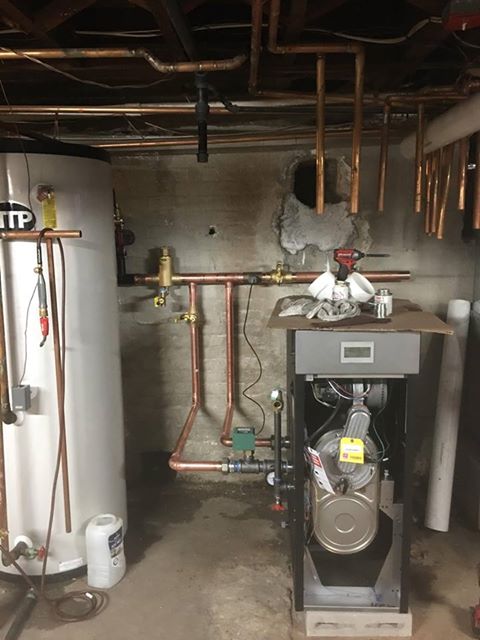 Above: A subcontractor was hired to line the existing chimney with flexible polypropylene vent.
Day two came and it was time to set the boiler. To speed things up, HomeServe generally installs premanufactured primary/secondary piping. Kopec says this easily knocks two hours off a job. But the 399 MBH unit required two-inch near-boiler piping, which isn’t a stock item. So they made their own out of copper onsite.
“When we install boilers, we keep ease of service in mind,” said Kopec. “We put Webstone isolation valves on all our systems for that reason. The service guys love us for it.”
The boiler was fired halfway through day three.
No news is good news
“Despite the bitter winter, we haven’t heard a peep from the homeowner, and that’s always a good sign,” said Kopec. “The most important thing when swapping out a cast iron boiler for a condensing boiler on a hydronic coil systems is making sure that the boiler is condensing without sacrificing system responsiveness. The Alpine is 95 percent efficient, and we want to capitalize on that.” 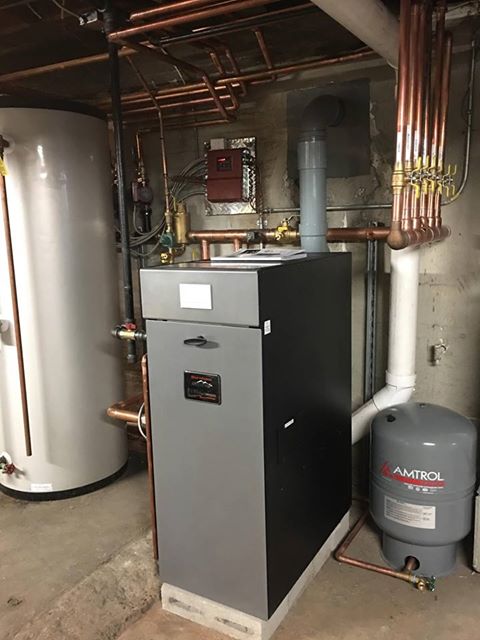 Above: The new Alpine boiler now provides heat for six zones and a large sidearm tank.
Based on the size of the coils in the ductwork, Kopec was able to maintain a 20°F Delta-T. His outdoor design temperature is 25°F, and supply water temperature fluctuates between 130 and 180°F, per the outdoor reset control. Of course, the indirect tank has priority.
“The Sage 2 controls on these boilers is very user friendly, and especially helpful during start-up and combustion testing,” said Kopec. “I can see exactly which limits are open. The best boiler in the world won’t perform as intended if it’s not set up properly.”
The diligence and attention to detail HomeServe takes to each and every job is apparent. They deliver on their motto; “Say hello to peace of mind.”