Overflow pipe leaking: Why is it dripping & how to fix it

What is an overflow pipe?

Some of the most common components in your home that have an overflow pipe are:

Out of these common components, the first three, and combination boilers overflow outside. But the overflow pipe (also called the expansion/vent pipe) on a copper cylinder flows into the cold-water feed and expansion tank, and the overflow on a basin and bath feeds into the drain.

To protect yourself and your home against plumbing problems in future, HomeServe offers plumbing and drainage cover you can rely on.

When an overflow pipe is dripping or running with water, one of the most common causes is a problem with a float valve. Float valves are found in toilet cisterns, cold water tanks and central heating feed and expansion tanks. It’s a device that controls the water level and consists of a metal or plastic arm with a plastic ball on the end that floats on the water. 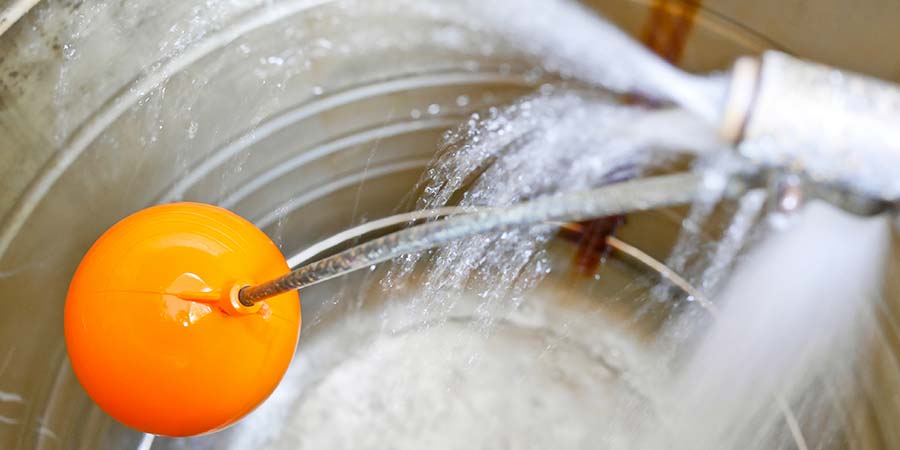 The maximum water level in the tank should be about one inch below the overflow pipe. If the float valve doesn’t operate properly, the cold-water feed may not fully switch off, causing the water level to continue to rise above the overflow.

If you’re not sure if it’s an overflow pipe that’s leaking, we’ve got a handy guide on how to diagnose leaking pipes, which will help you find the problem quickly and easily.

When you see water leaking from an overflow pipe:

1. Identify which water tank or cistern is overflowing

If the leaking pipe is at ground or first-floor level, then it’s likely to be your bathroom overflow pipe dripping, which will be coming from the toilet cistern. However, if it’s at loft level and protrudes from the eaves of the roof, then it could be coming from your cold-water or central heating feed and expansion tank.

Check the water level in each of these places if you’re still unsure. If it’s close to the overflow or higher than the ring of limescale that indicates its usual level, then you’ve found the culprit.

Top tip: If there’s only a small amount of water dripping into your cistern or tank, it may take hours for it to fill above the overflow level. Normal water usage during the day could keep the level low enough to disguise the leak, so you may only notice it early in the morning.

If water is running continuously into the tank, the float valve could be stuck down. Lift it up to release it and check nothing is stopping it from moving freely. If it’s moving with no problems, check the plastic ball isn’t punctured and filled with water. Should this be the case, it will need to be replaced. If neither of these are the problem, and the water still doesn’t shut off, the washer may be worn and needs to be replaced.

3. Turn off the water feed and drain the water

If you’ve identified that there’s a problem with your float valve, you’ll need to replace it or replace the washer as mentioned above. First, you’ll need to stop the flow of new water into the tank and drain it so you can work.

Your next steps will depend on what’s leaking and why.

The toilet overflow pipe runs from your toilet cistern to the outside of your house. It will be made of either plastic, copper or lead and will usually lead out through the wall directly behind the toilet.

If your toilet overflow pipe is leaking outside, it’s because the water feed into the cistern isn’t switching off. There are several possible fixes for this:

The cold water feed and expansion tank overflow pipe runs from the large water tank in your loft to the outside of your house. It will be made of either plastic, copper or lead and usually leads out through the eaves and soffits. The tank supplies your bath and basin taps and your hot water cylinder with water.

If your cold water feed and expansion tank overflow pipe is leaking, there are two possible causes:

1. The water feed into the tank isn’t switching off

2. Water is being pushed back up the outlet pipes

If your float valve is working fine, and the cold water feed to the tank switches off when it should, then excess water can only be coming back up through the outlet pipes (the pipes that feed water into your taps and water cylinder).

This problem is caused by a faulty mixer shower or tap that’s plumbed into the mains water feed. When you use the mixer, the high-pressure cold mains water pushes the low-pressure hot water back up the pipes into the cold water tank, causing the tank to overfill. If this is the case, you may notice that the overflow pipe only leaks when you use the faulty tap or shower.

For this problem, it’s best to call out a professional plumber who can diagnose the problem and fix it for you.

The central heating feed and expansion tank overflow pipe runs from the small water tank in your loft to the outside of your house. It will be made of either plastic, copper or lead and usually leads out through the eaves and soffits. The tank supplies your heating system and allows water to expand safely within the system when it’s heated.

If your central heating feed and expansion tank overflow pipe is leaking, there are two possible causes:

1. The water feed into the tank isn’t switching off

2. There is a problem with your hot water cylinder

If your float valve is working fine, and the cold water feed to the tank switches off when it should, then the only other cause is a problem with your hot water cylinder. Read the next section to find out more.

Overflow from a copper cylinder

The overflow (also called the expansion/vent pipe) from a copper cylinder runs into the cold water feed and expansion tank in your loft. This pipe allows for the water in the cylinder to expand when it’s heated.

There are two possible reasons for your copper cylinder to be causing an overflow pipe to leak:

1. The temperature on your thermostat is too high

It’s normal for the overflow pipe on a copper cylinder to drip when your water is heating. But if you find it’s running with water, causing your tank to overflow, then your water could be getting too hot. To fix this, simply adjust the temperature on your thermostat down a little.

2. The coil inside the copper cylinder is perforated

The only solution for this problem is to replace the copper cylinder. It’s best to call out a professional plumber who can carry out the work for you.

Combination boilers have a pipe that’s similar to an overflow pipe, called a pressure relief valve. This valve releases water if the system builds up too much pressure. The pipe is copper and runs from the boiler to the outside of your house. It will only release water if there’s a problem.

Your boiler’s overflow pipe may leak water if:

For safety reasons, it’s best to call out a Gas Safe registered engineer who can come and fix this problem for you.

To protect your boiler from problems in future follow these seven steps to help avoid a boiler breakdown.

The overflow on a sink is a small opening that’s found on the back of the sink just below the rim. It’s connected to a pipe that leads down into the drain. These overflows are found in bathroom basins, baths and kitchen sinks and help to stop your sink overflowing if you leave the tap running when the plug is in.

The simple solution to an overflowing sink is to pull the plug out and allow the bowl to drain.

So, in summary, if you see an overflow pipe leaking outside, the likely cause is an overflowing toilet cistern, cold water or central heating feed and expansion tank. Or it could be your boiler overflow pipe dripping due to a faulty combination boiler.

But remember, if your cold water or central heating feed and expansion tank is overflowing, it could be your copper cylinder that’s the cause, since it’s connected to these tanks.

If a basin or bath overflow pipe, or kitchen sink overflow pipe is leaking, you won’t see this outside as these pipes lead directly down the drain.

Don’t let a burst pipe or blocked drain slow you down. Take out plumbing and drainage cover from just 50p a month and get access to a nationwide network of trusted engineers.

How to balance radiators

How to fix a leaking stopcock

"Alexa, who is Andy Floyd?" Andy is a passionate creative writer, film buff, and smart home enthusiast. He's HomeServe's very own smart assistant, here to answer all of your home and lifestyle questions.

How to fix a leaking stopcock