How to prepare for bad weather

It’s important to keep an eye on certain things in and outside your home in case it is affected by bad weather. Follow Marlie’s top tips to help you prepare for the colder months.

Make sure your outside taps are switched off. If they are running or dripping there is a high chance that they’ll freeze. As an extra safety measure, it’s a good idea to turn off your internal stop cock that supplies water to the tap.

As well as taps, you’ll want to make sure that your external pipes don’t freeze as this could not only cause problems for your outdoor taps but also for your boiler. There are some preventative measures that you can take to avoid your pipes freezing over. 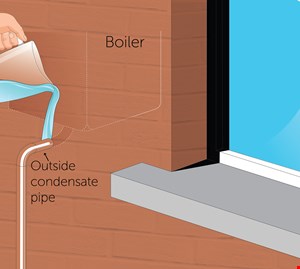 With a plastic pipe such as the condensate pipe which goes from your boiler to outside, you’ll want to make sure that it’s either lagged or joined onto a 32mm waste pipe. This will significantly reduce the risk of the pipe freezing over in colder temperatures.

The condensate pipe is incredibly important. If it was to freeze, then it could cause serious issues with your boiler so make sure that this is taken care of. If the pipe was to freeze over and you find out quite early on, you may be able to rectify this by pouring warm water over the condensate pipe itself. Make sure you aren’t using boiling water as this could cause damage to the pipe.

There’s a full guide on how to defrost your condensate here.

What if your pipes burst?

If any of your pipes were to burst then you’ll need to take action immediately. Your first priority is to turn off your water supply and to do this you’ll need to use your main stop-tap. If you have a tank fed system you will need to turn off the two gate valves on the tank; this is usually up in the loft or in an airing cupboard.

Another key thing to remember is that all pipework in the garage or in the loft is lagged; as these areas can go from hot to cold fast, they might be at risk too.

You can get more help on burst pipes here.

How to fix a burst pipe