How to get rid of mould

Mould is a common problem in homes, and one that you shouldn’t ignore. Not only does it look unsightly, but it can potentially cause serious health problems too.

Mould can be harmful to anyone, though babies, the elderly and people with allergies are particularly at risk. If it’s touched or inhaled, it can set off an allergic reaction, cause skin rashes, irritate the eyes, nose, and throat and trigger coughs and breathing difficulties.

Those that live in homes with mould and damp also increase the risk of respiratory problems and asthma. It’s important to tackle mould quickly to avoid the chance of it spreading and damaging the surfaces it’s growing on.

If mould is a problem in your home, don’t despair. In this guide, we’ll show you how to get rid of mould and prevent it from coming back.

Mould is a type of fungus that breaks down dead organic materials. It travels through the air as spores and grows when it lands on a damp surface.

It’s formed because moist, warm air conditions provide the ideal environment for it to grow. Our homes also offer the perfect place for mould to feed on materials like dust, carpet and wood.

Do you live in an area near water? This can also mean naturally high moisture levels in the air, with the potential for mould spores to enter and grow mould spots in your home.

If a surface has been wet for over 24 hours, that’s when mould is likely to begin growing and usually signifies a problem with damp. The growth of mould will continue until it’s removed by cleaning and drying.

Different types of damp and causes of mould include:

Mould thrives in dark and warm conditions, but its main requirement is moisture. That’s why it’s most commonly found in kitchens and bathrooms where humidity is high. However, other rooms in the home can also be affected by mould if they have damp problems.

Poor ventilation is one of the top causes of damp in homes. When moisture can’t escape, it builds up in the air and is then deposited onto hard surfaces as condensation. Activities that add moisture to a room, such as cooking, showering or hanging out damp washing, can make matters worse. And if the condensation isn’t dried within 24 hours, mould may begin to grow.

Damp can also be caused by plumbing leaks in water pipes behind your walls or under your sink, for example. Or water could be getting in from outside if there are structural problems. Poor damp-proof course, overflowing gutters, broken roof tiles, poorly sealed windows and doors, or rotten wooden fascia boards could all be causes of damp and mould growth in your home.

To protect yourself and your home against leaks that could lead on to damp, HomeServe offers plumbing and drainage cover you can rely on. Plus find out more about LeakBot, our smart water leak alarm that spots hidden leaks before they become big problems.

How to get rid of mould on walls

There are many treatments you can use for mould. For a chemical-based treatment, buy a ready-made solution or make your own.

To make your own bleach solution to get rid of mould on walls:

If you prefer a home-made solution, here are some inexpensive alternative remedies you can use instead:

Mildew is the most common type of black mould on walls. It starts off as spots and can quickly spread over large areas if it’s left untreated. 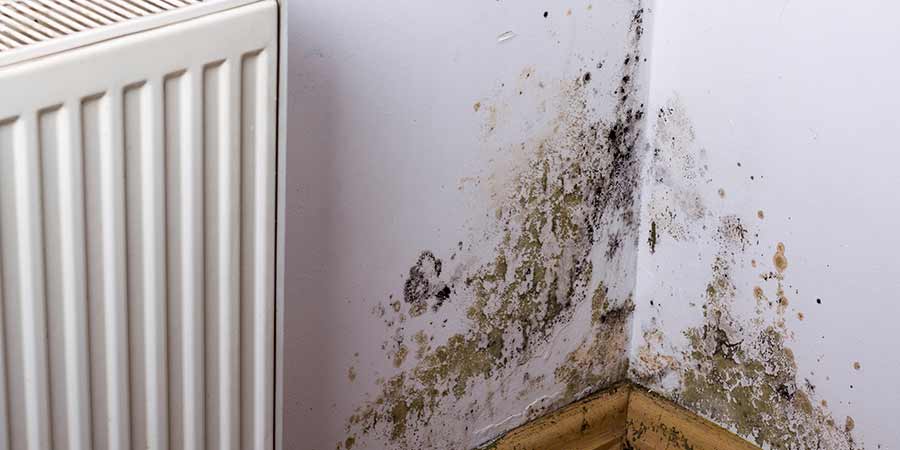 It commonly grows on walls around windows, behind furniture, on the ceiling and in the top corners of rooms. And if it’s caused by rising damp, it grows up external walls from the skirting board.

Tip: Whichever treatment you choose, always protect yourself with rubber gloves, goggles and a dust mask. You should also open a window for ventilation while you work.

How to get rid of mould in the bathroom

Mould loves bathrooms because they provide the perfect damp conditions for it to grow. And even the most spotless room will harbour black mould in bathroom cracks and crevices, such as plug holes, shower hoses and around the base of taps.

To remove mould from small areas in the bathroom, use any of the chemical-based treatments or home-made remedies mentioned previously for walls e.g. mixing one-part bleach to four-parts water. Spray the solution on the affected area and leave it for 30 minutes. Then use an old toothbrush to remove the mould and rinse it away with water.

How to get rid of mould in shower heads

Mould can build up inside the shower head and although it’s usually hidden, it releases harmful spores every time you shower. The best method is to remove the head from its hose and unscrew the section where the water comes out. Immerse both parts in one of the treatment solutions and leave it for several hours. Then scrub the mould away with an old toothbrush.

How to remove mould from grout

Grout is particularly prone to mould because it’s porous, so holds water for longer. Mould can be removed from grout by using a pre-mixed shop-bought chemical spray or with a home-made bleach mix (one-part bleach to three-parts water). Spray the affected area and leave it for 30 minutes. Then scrub the mould using a brush, rinse the area and dry it with a cloth.

Tips for preventing mould in the home

The key to preventing mould is tackling the underlying issue that’s causing it, which in most cases, is moisture.

By following these simple steps, you can control the moisture levels in your home and prevent mould growing in future.

We know mould can be a big problem for some homes. But as you can see, there’s no need to panic. If you tackle it as soon as you see it, identify the cause and take preventative action you can stop it in its tracks, so it never comes back again.

What to do if your boiler won't ignite

How to repressurise a boiler with low pressure

"Alexa, who is Andy Floyd?" Andy is a passionate creative writer, film buff, and smart home enthusiast. He's HomeServe's very own smart assistant, here to answer all of your home and lifestyle questions.

How to repressurise a boiler with low pressure