Why dads get all the best smiles

As Steve celebrates his first Father’s day Rachael reflects on why Steve is such a great dad and gets all the best smiles.

This will be my second Father’s Day without my own wonderful dad and the first one was a very sad day. But now with our gorgeous little boy around there is reason to celebrate again. It’s such a wonderful thing to watch their relationship develop.

We have this running joke amongst the mummies in our NCT group that the dads get all the best smiles from our babies. For most of us, Mummy is standard, she’s there all day, essentially, she is boring. But daddy? Daddy is a curiosity, they never know when he’s going to turn up but when he does? They reserve their biggest, beamiest smile for that moment. Last Monday was a case in point.

I spent all day travelling to London and back for a meeting and Fred barely raised a smile on my return. Yet the following day Steve rocked up early from work half way through bath-time and Freddie practically hyperventilated with excitement. 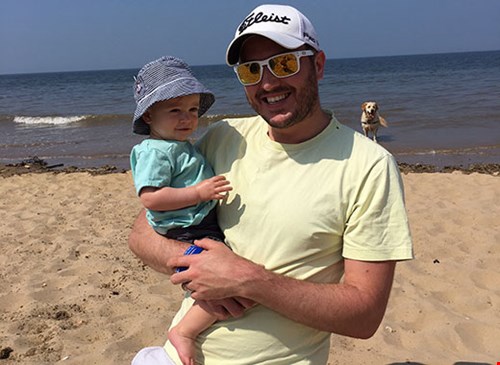 Freddie’s babbling is coming along and when he’s upset it’s always MAMAMAMA. When he’s happy? DADADADA of course!

There’s a good reason Steve is favourite and that’s because he’s an amazing dad. Loving and patient and constantly in awe of this wonderful little person we’ve created. Steve and his own father have such a close relationship, they call each other ‘mate’ as they really are best pals. I always knew Steve would be a great dad (it’s one of the many reasons I married him!) but he’s really surpassed all my expectations.

Steve’s working hours mean he’s often home too late to help to put Freddie to bed but if he does make it back in time he’s always just full of joy to see our little boy no matter what kind of day he’s had. Freddie has been waking at crazy o’clock since the mornings got lighter but I’ve still been able to get some sleep as Steve does the lion’s share of getting up early so he can spend a few precious hours with him and I can rest to make sure I‘ve plenty of energy to chase the trouble-making little one around the house all day desperately trying to stop him seriously injuring himself!

I know already I’ll always be playing second fiddle to Steve in Fred’s eyes and I’m totally fine with that. I’m hoping this will come into its own for me when Freddie is old enough to ask for one of us in the morning when he wakes with the lark. I’m pretty sure it’s going to be Steve heading downstairs to watch cartoons while Mummy gets a lie in!

Freddie is always so relaxed in Steve’s company. While he spends most of our time together trying to crawl out of my arms and into the arms of danger, with his Daddy he’ll happily sit next to him on the sofa watching TV or reading. This is especially true if there is any kind of sport on TV… particularly football… like father like son! I can’t wait to see the two of them heading off to football practice together – though I’m in less of a rush for all those extra random football matches I’m going to be watching on TV. With two against one I’m going to be outnumbered when I want to watch Real Housewives.

Now I feel I’ve bigged Steve up a lot here and just to make sure he doesn’t get too much of an inflated dad ego I should point out there are times when he gets it wrong. Let’s not even discuss some of the random outfits he proudly dresses him in of a morning. He’ll bring him into our room all…’Look at what this dude is wearing!!’ and I have to swiftly dispatch him back to the nursery to dress him in something that doesn’t make him look like a hobo. Then there’s the way he likes to freestyle my very precise instructions for feeds, naps and activities when on daddy daycare.

But he really doesn’t have any shortcomings as a dad and I will be relying on him being laid back Daddy in the years to come…the yin to my over-anxious mother yang.

So I raise a glass to Steve and all the other fun-time daddies out there on Father’s Day. Whilst we may not always say it, you do an amazing job. I hope you all enjoy a lie-in and a beer this Father’s Day. Make the most of it because it’ll be back to the early mornings and stern words for not dressing the baby quite right again tomorrow!