What does Valentine’s Day mean to you?

Valentine’s Day is fast approaching, but over the years many of us have actually come to dread what is pegged to be the most romantic day of the year.

Why? Well despite being a long-term tradition that dates back to the 17th Century, it stands today as the second most lucrative occasion after Christmas.

This means one thing – shops and supermarkets are able to cash in on the event year after year and it’s now so commercialised many of us don’t even know where the concept of Valentine’s day originates.

A little bit of history

Well, the roots of St. Valentine’s Day actually lie in the ancient Roman festival of Lupercalia, which first saw young men draw the name of a young woman in a lottery. This custom went through many changes over the years, but for Roman men the day – 15 February back then – continued to be an occasion to seek the affections of women by giving out handwritten messages of admiration.

In the 1800s printed cards came into fashion, with the first published in America in 1849. Hallmark began producing them in 1916 and the market has gone from strength to strength ever since. In fact, it is predicted that around one billion cards will be sent around the world this year.

However, there’s a real pressure that comes with Valentine’s Day. Whether you’re in a new relationship, have been with someone for a while, or aren’t with anyone at all, the whole build-up and gift buying experience can be a little overwhelming.

I personally don’t believe that a date in the calendar should dictate when or how you show someone that you love them. Genuine affection doesn’t come in the form of a lavish gift – yes, surprises are nice, but not when society is pressurising us into it in the first place.

That’s what I think, but I really wanted to understand how others view Valentine’s Day. So, I approached the People of HomeServe to find out, and it’s fair to say that opinion is certainly split… 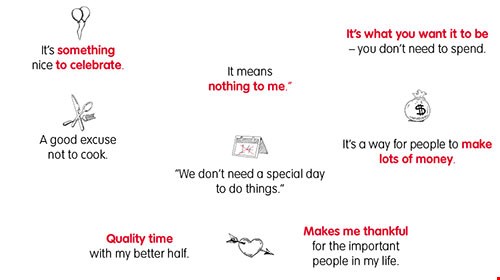 No matter what you’re doing this Valentine’s, remember not to feel pressured into following the crowd. Everyone is different and regardless of whether it’s 14 February or not, those little things to show someone you love them count all year round.

What are you doing this Valentine’s? We’d love to hear about it.