Before the League One Play-Offs Tom Bradshaw gives us an exclusive glimpse into the challenge that lies ahead.

Although we were frustrated not to secure automatic promotion, everyone is now fully focused and thoroughly looking forward to our play-off games against Barnsley. We will head into the next two matches with confidence, belief and momentum following a run of three consecutive wins.

After the disappointment of losing at Bradford, we knew that realistically we had to win all three of our remaining matches to have any chance of finishing in the top two. We were able to achieve that – and did so in style, scoring ten goals and producing three very pleasing performances but, unfortunately, it wasn’t quite enough.

Nevertheless, everyone is feeling really confident after recent results, especially after winning so convincingly against Port Vale on Sunday. Our performance at Vale Park was, in my opinion, one of the best we have produced all season. 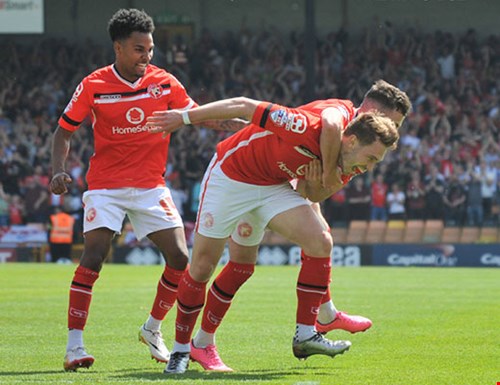 We started on the front foot, created lots of chances and dominated throughout. We scored some brilliant goals and could have had more. Not many teams go to Port Vale and come away with three points so to win in that manner, and by that scoreline, was some achievement.

On a personal level, it was fantastic to score my 20th goal of the season. All strikers set targets pre-season and mine was 20 goals. It’s a nice feeling to have reached my target but, much more importantly, I’m pleased that my goals, and performances, have contributed to the success of the team on the pitch.

Whether we win, lose or draw we do it as a team. This season, it really has been a phenomenal team effort. Every player has played their part, from those who play every week to those who come on and off the bench. It has been mentioned many times already this season but the team spirit here really has been key to what we’ve achieved. We’re a really close, tight-knit group and we all enjoy each other’s company.

Not many people – certainly outside of Walsall – believed we would be anywhere near third in the table this season. But, within the group, we have always believed in our ability as a collective and felt we had the potential to have a really strong season. Now we need to make sure we do ourselves justice in the play-offs.

We are well aware of the challenge that lies ahead against a very good Barnsley side. The Tykes have had an excellent second half of the campaign and will be desperate to get back into the Championship.  They also won the Johnstone’s Paint Trophy final fairly recently so we know they will pose a real test but it’s one we are all relishing. And although they may be in good form, so are we.

We’re pleased that the first leg is away from home and hopefully we can take an advantage into the second leg. We have been fantastic on the road all season and we are confident that if we can perform to our best – like we did at Port Vale – then we will come away with a positive result.

We need our fans to get behind us once again, though. The support we received at Port Vale was phenomenal. From the moment we arrived, the fans were in fantastic voice. They didn’t stop singing throughout the afternoon and we were pleased to put on a performance for them. Hopefully we can give them a day out at Wembley in the coming weeks and we will be doing everything in our power to get there.