The magic of leaf mould

Discover the magic of leaf mould with Alys and learn how to easily recycle your autumn leaves into free compost.

Leaf mould is magic. Actually, that it is not entirely true, leaf mould is merely autumn leaves that have rotted down and this process is fascinating, but not exactly magical. The leaves rot down thanks to an army of fungi that slowly break down the leaves until all that is left is something soft, fine and very dark. It is such lovely stuff that if it wasn’t outside and often wet you might choose to lie down and go to sleep in it.

So it is not magic, but what it does is a little magical. Leafmould when added to soil or mixed in with compost does something very magical to the world that plant root inhabit. It is not particularly rich in nutrients compared to homemade compost because most of the nutrients the leaves once held were scavenged by the tree before it dropped them. Leafmould does several things to the soil. It promotes beneficial fungi in the soil. It creates a better soil structure. This in turn improves aeration so that the soil can hold onto to water when it needs it and let water go when it doesn’t and that’s pretty magical in my book.

Plants that like fungal dominated soils do so because the fungi helps them to take up water and nutrients. In part the fungi does this by invading the plants roots (in a very happy invasion) and extending them so they can have more surface area, it also allows them to talk to each other and exchange nutrients and chemicals as needed. Essentially the fungi acts as high-speed broadband allowing plants to reach out and find what they need.  Thus if you want your lilacs to bloom, your apples to weigh heavy with good harvest, if you want your gooseberries to grow fat and your shrubs to look full of luster and life then you need to add more fungi to the soil and the easiest way to do that is to make leaf mould.

Leaf mould is also very good for seedlings because it is low in nutrients, has good aeration and a low pH, as well as excellent water retention, it is also soft and inviting for young tender roots. It makes a very good addition to multi purpose compost to make a cheap and wonderful seed compost.

The most joyous bit is how easy it is to make. All you have to do is gather all the autumn leaves and leave them somewhere to rot down. You can speed up decomposition if you run a lawn mower over them first to shred them.

The leaves will take a year or so to decompose, thus its wise that this place is out of site. You can fashion a leaf mould bin out of chicken wire (it’s good for the leaves to be exposed to lots of air and water as it helps them break down quicker). Or you can gather the leaves up in bin bags, just makes sure you poke some holes in the bottom of the bags so that air and water can get in. Or if you are feeling lazy, you just need to brush all those autumn leaves under a shrub where they can spend the winter slowly rotting down without any effort on your part. 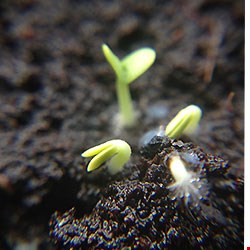 In the beginning, seedlings get all their nutrients from their seeds and too many external nutrients can heed growth. Shop bought seed compost is always very low in nutrients. You can mix multipurpose compost with leaf mould to lower the nutrients and make a softer bed to start life in.

All you need to do is mix equal parts of leaf mould and compost. If you’ve only made very little leaf mould and despite gathering a huge pile of leaves you’ll find it rots down to less than a third of its initially volume, making your own seed compost is one of the best uses.

You can also top dress or mulch any pots that are growing shrubs, fruits bushes or perennials. Again if you have a limited supply it’s good to concentrate your bounty on pots or containers because the soil tends to compact over time and your plants will be very grateful for a little release. You don’t even have to mix it in, worms love leaf mould to line their beds and will do the work for you.