The highs and lows of motherhood

Six months in, Rachael pens the highs and lows of her journey into motherhood so far.

Mother’s Day takes on a whole new dimension this year. Rather than just sending a card and flowers I am now to be the receiver (I am reliably informed Fred has been saving up his pocket money).  As I have now been a mummy for almost six months it seems like a good time to reflect on some of the highs of motherhood and their corresponding lows.

There is nothing as wonderful as your baby’s smile.  You can be in the foulest of moods and having the worst day and then baby flashes you a big gummy grin and it’s all ok again.  Sometimes they make you work for it. I have had some odd looks from strangers while pushing the pram around grinning like an idiot at Freddie in the hope of getting one back.

To make sure you are not feeling like too much of a good mum from those wonderful smiley moments there are also the periods of inconsolable crying.  We are just enjoying all the fun of the teething fair (which is about as much fun as a slap round the ear).  If you thought those newborn cries were loud then these have taken it to a whole new level. It’s fine though… I’m told it only takes around 2 years (?!!) for all their teeth to come through…

I actually lied about the baby smiles being the best thing ever, one thing beats them and that is baby laughter. Two things guaranteed to make him laugh – my face and pooping during a nappy change.  I think he’s inherited his father’s sense of humour.

Even the giggles fail to make these better.  Nothing good ever came out of a baby’s nappy.

High – Spending all day with your new bestie

Don’t get me wrong, looking after a baby is WORK! Really hard work.  But it’s also a wonderful time getting to know your very own, new little person whilst hanging around in your onesie, singing and playing with toys.

Low – Spending all day with your new bestie

The dawning realisation (usually when a baby is watching as you go to the loo) that you do not get to have a moment to yourself again. Ever. Well it feels like forever anyway.  I imagine teenagers are less work…*hollow laughter*… although I accept I may stand corrected on that one .  There are so many projects I would like to start but the relentless cycle of feed/change/nap/bedtime/sleep doesn’t leave much time for anything else!

High – When your baby learns something new

I have never really given much thought to baby milestones before but now they are a daily focus.  Baby rolling over is greeted with the kind of euphoria usually reserved for Olympic medal winners.  At this rate I imagine we’ll be cracking open the Champagne for the first word. (We really don’t need that much of an excuse, we are parents to a 6 month old – we don’t get out much).

Low – When your baby won’t do what you do

Babies need to nap.  I know that.  Sometimes Freddie does everything in his power to show otherwise.  There is nothing more soul destroying than waiting for half an hour for him to drop off only to discover he’s still wide awake and having a little party in his cot! We are still embroiled in the ‘Battle of the Bottle’ as well. When Steve last blogged about it we were on the winning team, but Freddie has decided he really doesn’t know how to drink from a bottle after all. We are still on the hunt for that magic bottle he will like – eighth brand and still counting!

High – Days out with baby

Trips away and dog walks take on a whole new joyful element with a smiling baby strapped to your front.  It makes you look at the world in a whole new way as literally everything is new and fascinating to Freddie.

Low – Packing for days out with baby

There is no simple ‘putting on of coat and dashing out of the house’ anymore.  Setting foot outside the door requires military planning.  Packing for a weekend away takes longer than the weekend itself and our change bag contains pretty much everything bar the kitchen sink (we don’t need a sink – we have a change mat and water wipes!). 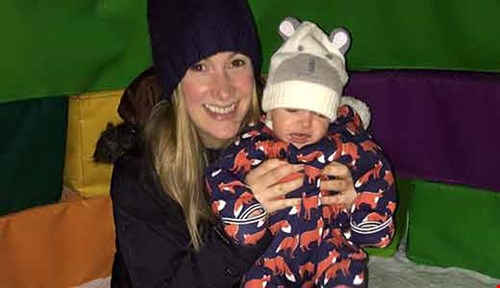 So far the highs have outweighed the lows and that is winning in my book!  Six months in, I feel like I have learned more than I ever thought possible… and yet I am still frequently and inevitably clueless.  I do know that my first Mother’s Day will involve pretty much all of the above, though I am hoping Daddy will take over nappy change duties for the day!

Getting the best out of your flowering plants