Follow Steve Bland’s story as he embarks one of the most important chapter of his life.

‘So no-one told you life was going to be this way’ said The Rembrandts in 1995 in a song that would become famous as the theme tune to Friends. I mention it now for two reasons. First, because early morning re-runs of Friends seem to make up 90% of my TV viewing at the moment. After a couple of bewildering nights when we first got home from the hospital, it seemed to make sense to take the night in shifts.

I stay up with the baby as late as possible, trying desperately not to fall asleep on the sofa, while the wife sleeps – and then I sleep from about 1am until whenever she wakes me for the handover. Then, at around four or five in the morning, I often find myself back on the sofa, trying desperately (again) not to fall asleep. The second reason I mention Friends, is because that opening line may as well have been written about the first few weeks of being a parent.

It’s not that no-one tries to tell how your life is going to change or how tough or wonderful it might be – it’s just that, in our case, no-one even got close to hitting the nail on the head. Nothing can prepare you for that moment when the midwife hands you the baby you have waited so long for. And nothing can prepare you for that first night when it’s just you. And the baby. 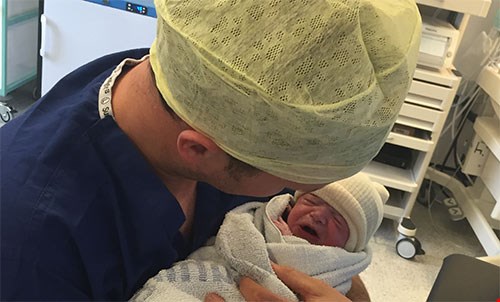 Before I go any further, let me take you back a little bit. I won’t bore you with every cough and spit from the past nine-ish months – but it is worth giving you a bit of background on how we got to this seminal moment in our lives. We had known the baby was breech for quite some time and at first, it was tough to get our heads around. More for my wife i should say. Weeks of NCT, baby books, hypno-birthing and daisy birthing sessions (don’t ask me what the difference is) had helped her design the perfect labour.

It was all mapped out with military precision and it was going to be a perfect experience. Looking back now, I wonder how we ever let ourselves believe that we could plan ANY part of this crazy adventure. The fact is that there are so many variables and so many things that can and do go wrong that the ONLY thing that matters is getting out of it with a healthy baby and a healthy mummy.

Of course it’s easy to say that now. Back then, the prospect of a c-section was hard to take and it wasn’t helped by some idiotic women on forums suggesting that you simply couldn’t be a proper mother if you hadn’t been through the pain of labour. Again….nonsense. One of the best pieces of wisdom that anyone passed on before the birth of our boy was that it really doesn’t matter how they come out.

Once you hold your baby for the first time, how they came to you becomes totally irrelevant. Anyway, I digress. Over the following weeks we got our heads around the fact that we wouldn’t be using the tens machine we’d bought and that the hypnotherapy cd would stay in its case. We also couldn’t take the tens machine back to the shop because I got it out of the box and tested it on my arm – but that’s another story altogether.

Anyway, three weeks before our due date we booked in for a c-section and started counting down the days. Knowing a definite date for our baby’s arrival was actually quite useful. I was able to get my paternity leave sorted and we had a deadline for all the jobs that we (or rather I) had been putting off. The banister I had been building and then painting for a number of months was finally finished and the nursery was decorated.

And so, on the appointed morning, we got up at what felt like the crack of dawn and headed off to hospital not fully aware of what exactly we were letting ourselves in for. After a wait of a couple of hours, one of the midwife team popped in with armfuls of scrubs. It was time. What followed was a bit of a blur. I remember being in the operating theatre with a huge number of people and then I remember my wife asking if they had started yet. I wasn’t about to peep around the canvas screen to find out but the supervising anaesthetist said it was already well underway. Then moments later we heard a baby crying. Not just any baby crying though. This was our baby crying and I can’t even tell you how good that felt. 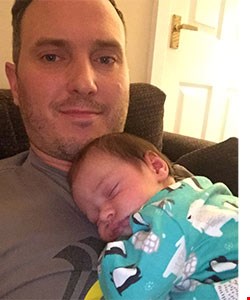 I started writing this a couple of weeks after he was born – but now I come to finish it off and he’s almost five weeks old. Reflux has been a word often used and even more frequently googled in the last couple of weeks. The little guy seems to really struggle with wind so we were advised to raise one end of his mattress. In desperation at 5am one morning we actually ended up buying a 25 pound wedge shaped mattress that does the same job and that has made a real difference.

I think the best piece of advice that i could give – albeit from my very limited experience – is that there are no rules when it comes to babies. Every time you think you might have nailed it, a desperate, sleepless night brings you back down to earth. The other thing is that it’s very tempting to think that your baby is far worse than everyone else’s and that no-one could possible understand. The truth is that almost every worry we have consulted the midwife or health visitor about has been met with the same response – ‘that’s just what babies do.’

Finally, for the purposes of symmetry, I’ll end where i began – with lyrics from the Rembrandts. It might be that no-one tells you life was going to be this way. But when you get to hold your baby for the first time you really will think it has been your day, your week, your month or even your year.