Settling in with a new baby

When it comes to parenting there’s a lot of pressure on new parents to get everything right. Read Steve’s suggestions about focusing on the things your baby does rather than getting frustrated by the things they don’t.

Have you ever seen a grown man jump when a baby farts? If not, then you’ve never seen me change a nappy. It’s like a game of roulette… except there are no winners! Early on we started covering our little man’s ‘danger zone’ with a small cloth or towel but even with that reassurance, the first warning signs of an explosion can send me ducking for cover.

But that’s just a very small and necessary challenge that having a baby boy brings. And let’s face it….what’s the worst that can happen!? One little giggle or a smile makes even the worst clean-up operation worthwhile. I have found, however, that erring on the too big side when it comes to nappies means that the worst of it tends to remain contained. 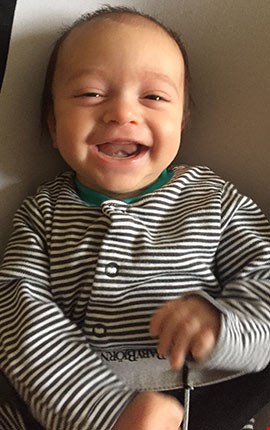 For the most part, things are progressing nicely. Our son is now a couple of months old and the changes he’s going through are quite startling. All of a sudden he’s gone from being a baby who offers you very little by way of interaction to something resembling a real person, who has thought processes and can give you something back. His weapon of choice when it comes to wowing the crowds seems to be a beaming smile. He must have figured out that he gets a good reaction whenever he does it because we get A LOT of smiles. A baby’s smile is such a wonderful thing – but a smile from your own child is something truly incredible. It’s not tinged with worry about bills or work. It’s just filled with pure joy and it’s magic.

That’s not to say it’s all been plain sailing. I thought for this second instalment I might share a couple of the challenges we’ve managed to find an answer to.

We tackled our first long journey last week with the little man. We headed down to Cardiff to visit my wife’s mother with the car laden with more stuff than you could ever imagine would fit in an estate car. The problem is the dog. That’s not to say he’s a problem, but he takes away the entire boot space. Anyway, once I had loaded the car up and popped the baby in his car seat, we set off. He quickly fell asleep as our speed climbed to a nice, constant 60-70mph. But then disaster struck. An incident on the M6 brought us to an abrupt halt and the baby woke up. 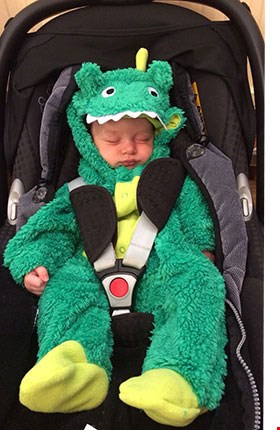 Do you remember the 90s film Speed? In case you don’t, let me remind you. There’s a part of the film where Sandra Bullock is behind the wheel of a bus that will explode if her speed drops below 50mph… I’m sure you get where I’m going. Having a baby in the car is a little bit similar. Now we know to try and dodge any traffic incident we possibly can – and avoid routes with too many roundabouts or traffic lights, just to keep moving.

One of the challenges that I’m sure everyone encounters with a first child is that you have no frame of reference. You’ve never done any of this before so when something goes wrong or poses a question you have nothing to fall back on other than friends, family, books and the internet. They’re all very useful until you find five different and conflicting answers to the same question.

That was the case for us when it came to using a bottle. For some, breast is the only way forward until the baby is several months old but others advocate introducing a bottle early because then the baby becomes comfortable with it. We plumped for the latter and it was going well.

As a new dad, giving my baby a bottle of expressed milk was a brilliant and rewarding way of bonding – until we went a week without giving him one. All of a sudden he completely forgot how to suck and rejected all of the many different brands of teats we tried. I’m not sure if this is a common problem but it caused all kinds of stress and thoughts like ‘we’ll never be able to go out without the baby!’ The answer lay in perseverance (and buying even more brands of teat until one worked) and now he’s having one bottle a day – and making daddy a very happy man.

Our boy has always been a reasonable sleeper between the hours of 11pm and about 8am but we managed to almost mess that up by trying to impose an 7-8pm bedtime at about eight weeks old in the hope of recapturing some ‘us’ time in the evening. He just wouldn’t have it and for a week or two we struggled to get him down for more than about 20 minutes at a time. But then a colleague gave me some sage advice. She said we should be thankful that he sleeps overnight and knows the difference between night and day. Don’t push it too much and be glad for what he DOES do rather than be frustrated with what he doesn’t quite manage.

I think that’s sensational advice. We all know people whose babies – apparently – are perfect sleepers and go to bed quite happily at 7pm and sleep right through the night. Their babies NEVER cry and I’m sure they’re walking and talking by about six weeks too! I’m not sure any of that is helpful. All babies struggle with different things, be it sleeping or feeding and once you realise that and are thankful for what he or she does do well, the pressure to get the other bits right doesn’t seem quite as intense.

I want to end by giving my wife a mention. It might be that all new dads feel this way but I am in complete awe of her for what she achieves every day and for how she has taken to being a mother better than I – or she – could ever have imagined! It really is something to behold and all in all, I’m a very, very proud husband and daddy.