In the run up to Valentine’s Day Steve pays tribute to Rachael and all the mums out there.

A friend of mine, who shall remain nameless (AN – you know who you are) once said, through a hilariously painful mouthful of Pennsylvania’s hottest chicken wings, “sometimes you just need to be reminded that you’re not a legend.” He managed to get the words out as he grabbed anything and everything he could to douse the flames – and he was, of course, referring to the consequences of believing that there wasn’t a hot food on the planet that he couldn’t tame. It was comedy gold. But I mention it now because it came to me again this morning as we were picking through the debris of our most challenging night so far as parents.

I’ve explained before how well Freddie has been doing with sleeping. Normally we don’t really hear much from him between about 7.30pm and 7am but last night we heard an awful lot from him. To be honest it’s kind of my fault in a way. I’ve been off work for a couple of days with a stinking cold, sore throat, headache etc… and it seems that I’ve passed at least some of that onto the baby. We put him to bed at the normal time but then by 10pm he was wailing – and I mean proper wailing. The kind that makes you want to rip your ears off. We managed to calm him down but then the same thing happened at midnight, 3am, 5am and 7am and no amount of Calpol could stop the onslaught.

I should say that I do understand that for many, many parents of little ones, nights like this are the norm. Not every baby cracks sleeping like Freddie and we’re so grateful for what he manages to do. But maybe that made last night even tougher. I think we were starting to think we were getting to grips with this parenting thing – and it was a stark reminder that we definitely are not.

So my Sunday has been spent going back and forth between home and Boots, and I think I’ve managed to buy every product that claims to help with baby congestion or sooth cold and flu symptoms. Even now, as I type these words, I’ve just been asked to fetch the snot sucker. What has happened to us? I’m sure we used to be fun once.

Anyway, he’s sleeping now and it’s 9.30pm so fingers crossed! Whatever happens, sometimes it’s not a bad thing to be reminded that you’re not a legend every once in a while.

There was a really interesting blog shared by a few mates on Facebook this week. It was by an American mum and it was entitled, ‘Dumb-ass Stuff we Need to Stop Saying to Dads.’

It was all about how the role of a dad is undervalued and how there’s too much focus on mothers. One line that stood out was, “We need to stop talking about Dads like they’re an inept accessory to parenting…..the good Dads need to be part of our language of parenting.”

I do agree to a degree but I was thinking about my role as a new dad the other day and I reckon it’s a bit like being on work experience at a fantastic company. As a work experience kid you’re given jobs which seem important and daunting at the time but afterwards you realise they were ones that you couldn’t really mess up – and if you did mess them up, it didn’t really matter because someone was there to pick up the pieces. Maybe that’s trivialising it a touch but the point is, in the early weeks and months at least, mummy is the one we should be learning from – she’s always the one picking up the pieces. 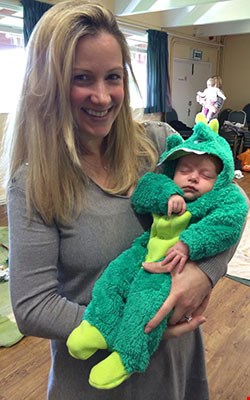 I’m not a big one for celebrating Valentine’s Day but with February the 14th fast approaching, I hope you don’t mind if I pay a little tribute to Freddie’s mummy – and mums in general.

It has been truly awe inspiring to see Rachael take to motherhood so incredibly well. But it shouldn’t be a surprise. She was the one who read the books, she signed up for all the classes….in short, she knows what she’s doing. She was already a parent before the baby arrived. I’m trying desperately to catch up and to learn, but she’s so far ahead.

Watching her sit with Freddie as he struggles to get off to sleep, listening as she tells him that ‘mummy’s here’ for the 25th time, then hearing her read him ‘Where Oh Where is Huggle Buggle Bear’ for the 247th time or seeing THAT look that he gives her. It’s all wonderful and I can’t tell you how happy and proud it makes me.

There was another Facebook post that caught my eye today. It was a quote and it went something like this, “A woman is like a teabag. You never know how strong she is until you put the hot water in.” Doesn’t that just sum up a new mother perfectly?

So thank you Rachael for being such an amazing mummy to Freddie. Happy Valentine’s Day and here’s to me learning from the best – and hopefully enjoying a good night’s sleep again sometime soon!