No Result
View All Result
Home Rooms and Spaces Bathroom

How to clean a toilet

Who hasn’t had the experience of visiting a toilet, somewhere, and seeing really horrible brown stains in the bottom of the toilet bowl. It’s just gruesome, isn’t it?  So let’s start by dealing with the issue. It’s not as bad as it looks, because it’s almost certainly not what you think.

The stains that you see at the bottom of a toilet are usually limescale, or calcium carbonate to use the scientific name. Limescale arrives as a result of water travelling through specific rocks, such as chalk and limestone, on the way to reservoirs and then to our water filtration systems. Annoyingly, despite the UK having some of the highest water quality in the world, removing minerals such a calcium carbonate is really difficult. This limescale deposit is no risk to health, although it will fur up your kettle and eventually damage your dishwasher and washing machine if you don’t take preventive action.

In the bathroom, limescale shows up as a white powdery film that appears on taps and shower heads, as white droplets on mirrors and tiles, and greyish or greenish stains under taps in the bath. But when you get orange, pink or brown staining, as you often do in toilets, it’s because the calcium carbonate is mixed with iron or manganese compounds. Sometimes you see these beige or orangey stains around taps too, but usually it’s the toilet. So why is it so much worse there? Simply because the water sits for longer there, in fact the toilet is always full of water which is full of these hidden mineral deposits and so they get to take hold in the toilet much more rapidly and effectively. 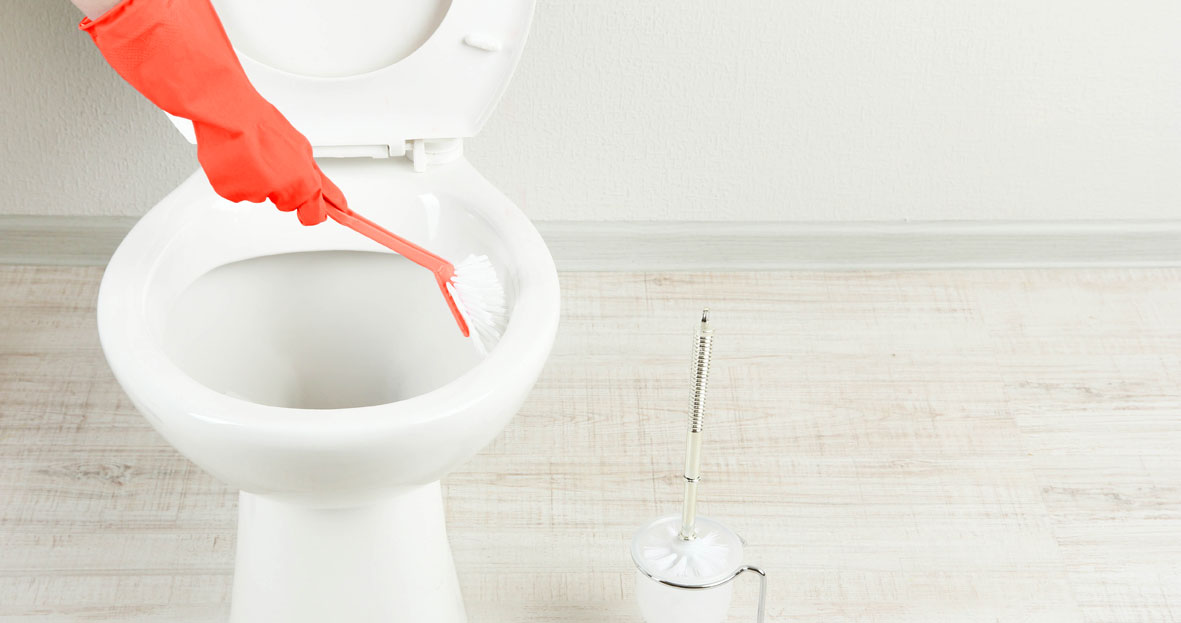 There is a prevailing myth that bleach is going to remove limescale. It won’t. What it does do, and this is why the myth developed, is bleach the limescale so that it’s less noticeable. Unfortunately this can lead us to think that the limescale has been eradicated, and so we keep using the bleach and the limescale keeps building up, invisibly. Bleach is a fabulous toilet cleaner, but for germs, not limescale.

Another myth is that you can stop limescale with a cistern block. It’s true that many cisterns blocks will reduce limescale, by using a calcium dissolving agent, but they simply can’t remove it completely because to have enough limescale dissolver in such a little block of material would be highly toxic and dangerous to have in your home.

Back to the toilet

So, having established that the staining may not be as yucky as you were thinking, it still needs to be dealt with. And we have everything you need to clean your toilet and keep it clean better and for longer. 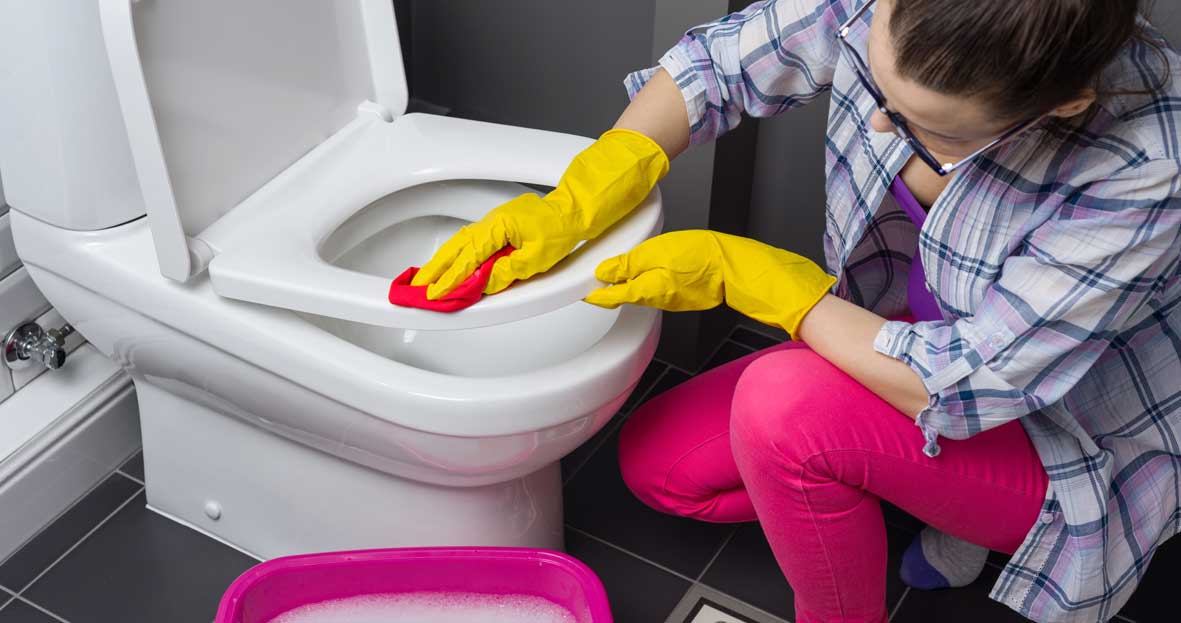 Tools and equipment to use

How to clean a dirty toilet – the basics

When you’re working out how to clean a very stained toilet bowl, the first thing to do is some basic cleaning, just to see what you’re up against. Pull on those rubber gloves, lift the toilet seat and then squirt that toilet clean around the rib and sides fo the toilet. Now pick up your toilet brush and get scrubbing. Your aim is to get that toilet cleaner into every crevice of the toilet, especially as far round the U-bend as you can. Leave it alone to do its work for half an hour.

At the end of the thirty minutes, go back and give it all another scrub with the toilet brush, before flushing. Most of the surface staining will have disappeared and – if you’re really lucky – your toilet will be gleaming. Job done!

But maybe that’s not quite the case. If your toilet has been neglected for a while, you’ll probably find that many stains have vanished but some stubborn marks will remain. Don’t despair, it’s time to move on to phase two.

How to clean a badly stained toilet – the secret weapons

Now we have every confidence in our first system, but the second one is a bit more of an urban myth. Some people find it works brilliantly, others think it’s a complete waste of time, but we’re going to let you try it out for yourselves if you choose. 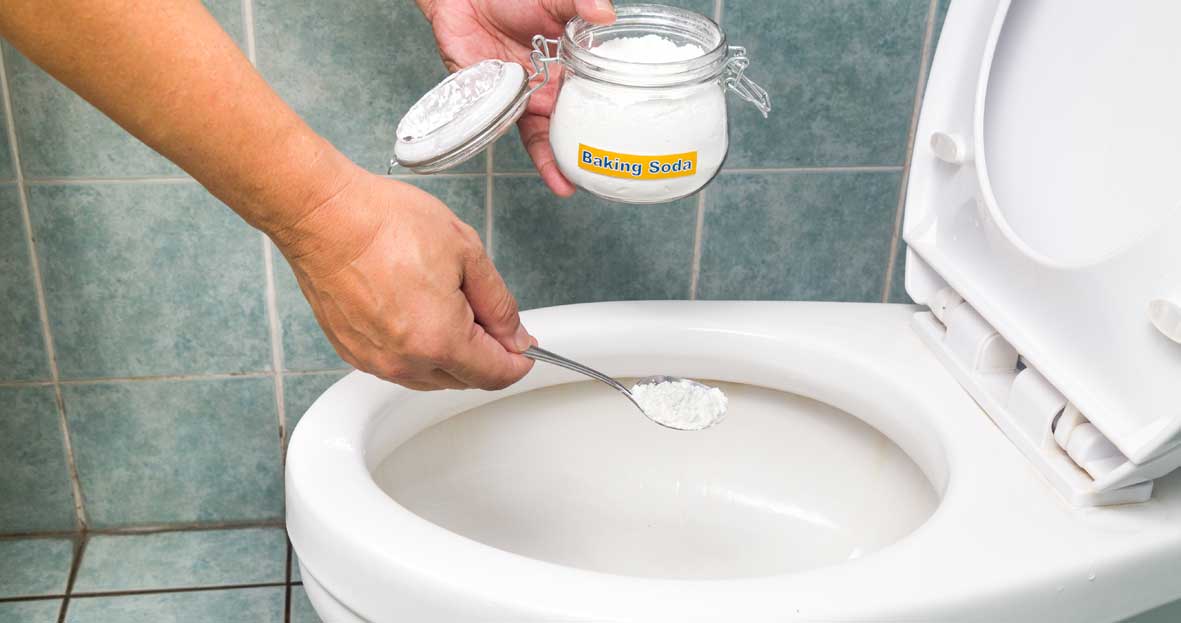 Baking soda is a wonderful natural cleaning agent which is good news if you are concerned about the effect of harsh chemicals on the environment. It’s an excellent mild abrasive which is why it’s used in toothpaste, but when combined with vinegar it creates carbonic acid, which actually dissolves limescale. So here’s how to do it:

With the bathroom window open, because vinegar smells strongly, put on your gloves and pour 250ml of vinegar (any kind will do, but we suggest the cheapest you can buy) into the toilet bowl, swirl it around with the toilet brush and leave it to sit for five minutes. It’s a good idea to keep the bathroom door closed between stages to keep the vinegar smell out of the entire house.

Then add around 200 grams of baking soda and then another 250ml vinegar. The mixture will fizz and bubble like something in a mad scientist’s laboratory, that’s exactly what we want, so leave it to do its work for about five minutes, once again with the toilet door closed. Wearing your gloves, scrub away at the toilet with your toilet brush, and then – finally – flush. Hopefully you have a scintillatingly clean toilet.

If you have stained grouting, you can use the same approach there too. Put your vinegar in a spray bottle and soak the grouting, then, wearing rubber gloves, work baking soda into the grouting with an old toothbrush, leave for 20 minutes and then rinse.

Secret weapon #2 – how to clean a toilet with coke

Yes, it sounds bizarre, but for toilets that have those brownish stains, Coca Cola does seem to have an excellent cleaning effect, at least in some cases. From what we can tell, from our very unscientific survey of this subject online, it’s about 50/50 whether this works or not. You also need to be patient and to have a reasonable degree of control over who uses the toilet!

When you can be sure that nobody is going to use the toilet for at least four hours, simply pour a full can of Coca Cola around the rim so that every millimetre of porcelain is coated. Leave it to sit for every minute of those four hours. Scrub away with the toilet brush and then flush. If you’re in the lucky 50%, you’ll have a glacier-clean toilet. If you’re not in the lucky 50% then head for our third secret weapon.

If neither of our first two approaches worked, you’re dealing with a really, really obstinate stain. Get two grades of sandpaper: medium and fine, and cut them into circles about the size of the top of a coffee mug, this stops you sanding too far either side of the stain. Fold the circle into quarters with the sandpaper side out and then put your fingers inside the little cone shape you’ve made. This gives you a precision sanding tool. Don’t forget to put your rubber gloves on first! Use an old rag to dry the area of the stain and then simply begin to rub gently, in a circular movement, from the outside of the stain to its inner areas. Don’t press too hard as you may scratch the surface. Repeat the process with the fine-grained sandpaper to gently buff away the rest of the stain. Cover the area with a toilet cleaning product designed to remove limescale and leave for ten minutes before flushing 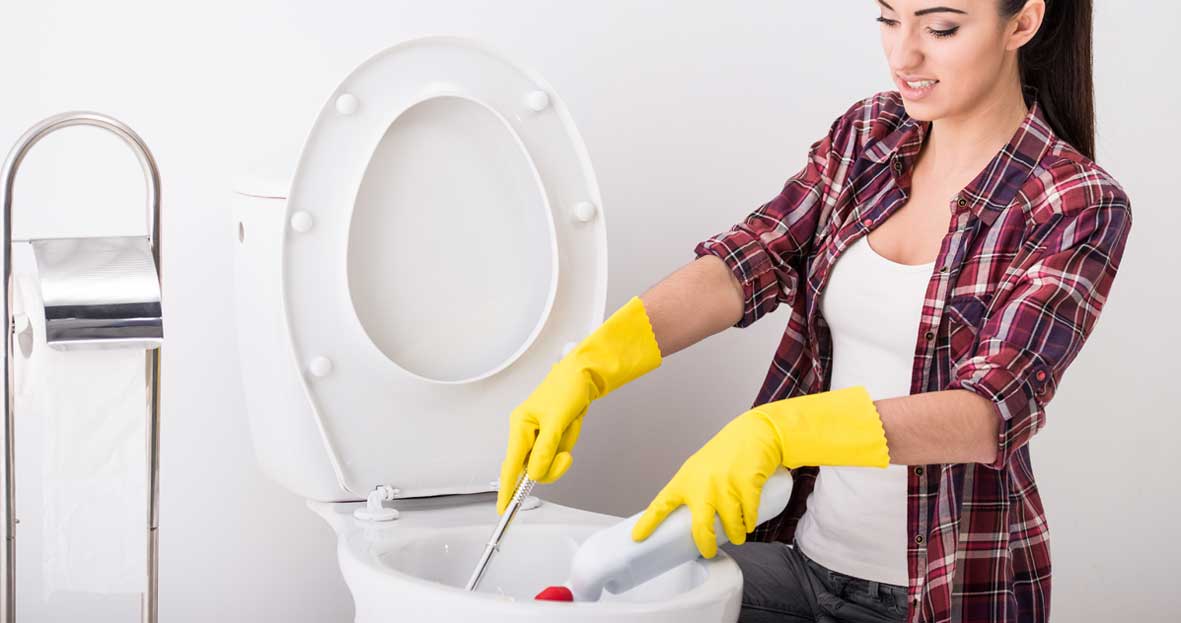 How to clean a toilet with bleach

Household bleach is a fabulous tool, it kills just about every kind of bacteria and virus, and it reduces the colour of stains. It’s best to use bleach overnight, so that it has the maximum time to destroy as many germs as possible, and again, as many people find the smell of bleach overpowering, it’s best if you can leave the bathroom window open while you’re bleaching the toilet.

How to keep a toilet clean much longer

When you’ve got rid of those horrible stains, how do you keep them away? Well around 125 ml of vinegar, left for half an hour, then topped up with some baking soda sprinkled on the toilet brush before you have a good scour around will deal with the build up of incipient stains. Once a month is perfect for this extra clean that means you’ll never again have to fight to eradicate horrible toilet stains.

What to do when your bathroom smells of urine

If you can’t get rid of that ‘public toilet’ bathroom smell, then it’s time to use that screwdriver. First unscrew and remove the toilet lid and seat. Then, after covering the screwdriver head with a cleaning cloth that you’ve sprinkled with disinfectant, clean the area under the tank and around the screw-holes by poking the cloth into those hard to reach areas. It’s amazing how much of a difference this can make. Replace the lid and seat and you’ll probably find your bathroom smells alpine fresh. This is a six monthly task, or one that you can undertake whenever it starts to smell a bit whiffy.

How to keep your toilet cleaner for longer

This is where the mineral oil comes into its own. Good old fashioned baby oil, because that’s what we’re talking about, when you put a few drops on a cleaning cloth, has the fantastic ability to remove limescale stains from the toilet handle or press, as well as from your taps and shower fixings. Not only that, but the very light film of oil that’s left when you polish your chrome or stainless steel with mineral oil actually stops the limescale getting such a hold. Finally, you can use the same product to polish up the outside of the toilet tank and bowl, which stops stains getting a grip and gives the porcelain a wonderful shine. A monthly wipe over with baby oil is all you need to keep your toilet, and other fixtures, looking great for longer.

How to remove a radiator for decorating

When I'm not singing with my band, I'm writing about everything to do with the home. Whether it's sharing quick hacks I've discovered or even complete home redesign projects. I'm all about making life more straightforward and simpler!

How to remove a radiator for decorating