Having graduated the first year of parenting school, Rachael’s put together her best advice on what to expect – a must read for all you first-time parents!

So we blinked and our tiny baby Freddie has become a one year old whirlwind. The little 7lb 4oz bundle of joy we brought home from hospital in September 2015 has become 21lbs of a sometimes giggling, sometimes rather cross but always oh so busy, little boy. We feel simultaneously more confident and ever more perplexed about what the next stage holds. In short we have survived our first year and graduated parenting school…until the next hurdle brings us crashing down! 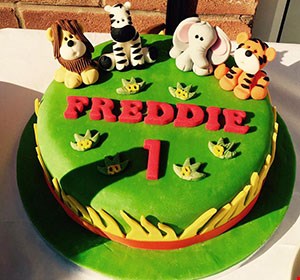 We celebrated Freddie’s 1st birthday in style. Plans for his party snowballed from a small family gathering to a big garden party with all his little buddies. The weather was kind to us with warm sunshine that wasn’t in the forecast and the babies had great fun chasing each other around the soft play set we hired in. We bought Freddie a climbing frame with swings and a slide as his present which we hope in years to come is going to give us plenty respite from an energetic little boy. He already delights in being pushed on the swings or down the slide.

I decided to earn my mummy stripes and take on the challenge of making his safari-themed cake myself despite having not baked before. I’m not sure it was ‘Bake-Off’ standard but after averting near-disaster with some pesky fondant icing I was pretty chuffed with how it turned out! Of course Freddie won’t remember the cake or any of his 1st birthday party in the years to come but we will treasure the memories of a wonderful day that topped off an amazing rollercoaster of a first year.

Here’s what to expect month-by-month in brief:

Not sleeping? Teething? Vomiting? Waking early? Not feeding enough? Feeding too much? Whatever your current crisis is, it probably won’t last very long. One minute you’re considering consulting a doctor or health visitor about your latest baby bugbear, whilst furiously Googling any manner of solution and the next, you’ve forgotten all about whatever it was that was troubling you so much because you’re tied up trying to solve the next conundrum that’s arisen. The 5.30am waking phase will go down as my least favourite, but as with many of these things it was solved totally by accident when we unintentionally disrupted his routine with a holiday! However bad things may seem at the time, just remember ‘this too shall pass’.

Try not to worry

It’s easy advice to give, much more difficult to follow, but if you can remember this you will save yourself a lot of heartache. I stressed too much in the early days about Freddie’s weight and whether he was feeding enough, so much so I inadvertently caused him to go on a nursing strike! Now he’s a robust little chap who’s right in the middle of the centile charts and enjoying all his food. I definitely feel like I wasted a lot of time worrying unnecessarily. But when you’re battling with the pregnancy hormones and a screaming baby in the early days it’s easy to miss the wood for trees.

When you’re pregnant and in the early weeks after the birth you hear this constantly. You’ll probably want to punch the next person who tells you to make the most of the middle of the night wake ups because you’ll miss that cuddle time when they’re all grown up. But it’s true….kind of (I don’t miss being woken at 3am!) The second you have your baby, someone presses the fast forward button. The first 12 months pass in a blur as you tick-off all those baby milestones at an alarming rate. Try and record everything, because I don’t think you can ever take enough pictures and videos. Even now it gives us such pleasure to look back at pictures of Freddie in his few months and see how much he’s changed and grown up.

We have emerged from the first year of parenthood, looking slightly older and more tired but happier than we could ever have imagined. Freddie is just a joy to be around making us laugh every single day. We’ve survived bringing up baby… now it’s time to find out what toddler-hood has in store for us!