15 years on Darren Byfield looks back on the day he helped Walsall FC secure promotion to the Championship.

I can’t believe it’s over 15 years since that special day in Cardiff! It makes me feel so old! But what a day it was. To score the winning goal as we beat Reading 3-2 to secure promotion back to the second tier at the first attempt was just an incredible moment in my career.

Even now, I still get Walsall fans contacting me – especially on social media – and telling me what a day it was. I get to see the highlights from that game a lot and every time I watch it I get the same feeling. It still feels incredible to see the ball hitting the back of the net. It was a really special moment for me and, in terms of my career, it was right up there with playing and scoring for Jamaica. It was a great, great day. 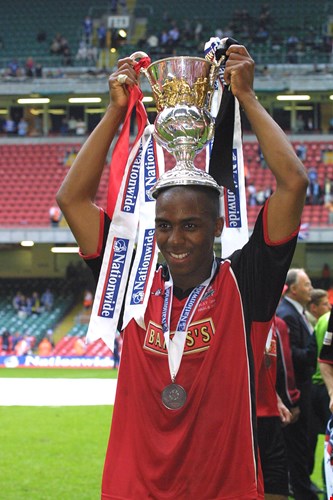 Unfortunately, Walsall were unable to taste play-off success last season. The play-offs are difficult. Finishing third, as Walsall found out, doesn’t guarantee anything. Having the first leg away from home isn’t always an advantage because if the home team win by a couple of goals, they can then set up to counter attack in the second leg. It really didn’t help Walsall against Barnsley, who were, in all fairness, the best team in the play-offs. Despite that, it was a fantastic season for the Saddlers. To finish third with 84 points and to come so close to automatic promotion was an amazing achievement.

I’m pleased Jon Whitney has been given a three-year deal as manager too. I watched Walsall’s game against Fleetwood on Sky and I was really impressed with how Jon had got them playing fast, attacking football. Jon was a physio when I was there in my second spell as a player but it seems he’s taken to management very well. This summer is an opportunity for him to build his own team and bring in his own players, and I really hope Walsall can push on.

On the topic of management, I feel very excited to have taken up my first senior management position at Redditch United. At Solihull Moors last season I managed the under-18s and the reserves but to be managing the first-team at Redditch now is a whole new level. When the position opened up, I contacted the chairman and went for an interview a few days later. It was a real honour to be offered the job. I didn’t actually realise how many people had applied for it. I’m grateful to the chairman for giving me the opportunity and I’m very excited by the challenge ahead.

Redditch are a club I know a lot about. When I was at Villa we used to play against them in pre-season, and last year, when I was with Solihull, we also played them. As a manager, I’ll never set any targets during the season. I never set myself any goal targets when I played so I’ll adopt a similar approach in management.

I just want my team to be able to perform week in week out and be fighting for Redditch United. We’ll approach every game with a positive mindset, looking to get three points and to entertain the fans. We’ve already brought in a few players and, earlier this month, we pulled off a real coup in bringing in former Crystal Palace and Birmingham City striker Clinton Morrison to the club. I’ve known Clinton a long time – he’s a close friend of mine. He’s vastly experienced and has still got a real hunger for the game. It’s a signing that sends out a message to everyone that we mean business. We want to do well and I want to bring in the right players. I need to make sure the players we bring in are hungry, committed and determined to help make Redditch successful.

And who knows, if we do really well, we may end up playing Walsall in the FA Cup – although we’ll have to get through a few rounds first!

Where to put solar lights to make sure they actually work

Where to put solar lights to make sure they actually work