Celebrating with the National Childbirth Trust

A new baby brings a whole new routine and way of life. Read about how the NCT have supported Steve and his wife and helped them to strike a balance between work and family life.

A few weeks ago we went out for our Christmas lunch with our NCT group – but before I tell you all about that, I have to partially correct something I wrote in a previous blog. It went something like this….’we tried to get the baby to sleep in the evening but gave up after a few days because he cried a lot so went back to putting him to bed at 11ish.’ Remember? I qualified it by saying that you should be happy with what your baby DOES do well rather than what he doesn’t do.

Now, at the time, that all sounded like great advice. We had tried and failed to get the little man to sleep in the evening and had done what we could to salvage our sanity. I still maintain that being happy with your own baby’s qualities rather than searching for the perfect baby is good advice – but when it comes to bedtime, it turns out I knew nothing.

A week or so ago we started following the advice of a professional ‘baby whisperer’ and it has changed everything. Our homemade routine of a bath at some stage followed by a story somewhere, with a feed thrown in somewhere too has been replaced by an hour long routine that has, so far, culminated each time with between six and nine hours of blissful peace and quiet. At 7.30 it’s time for quiet play.

The TV goes off and we read a story with classical music playing. Then it’s feed time, then ‘sensory play’ with light shows, music and more stories, then bath, then bed. And hey presto, all that has – so far – equalled a happy, sleeping baby. It turns out we didn’t have a bad sleeper after all, just the wrong routine! So if your baby, like ours, isn’t the best evening sleeper, it might just be that he or she isn’t to blame! 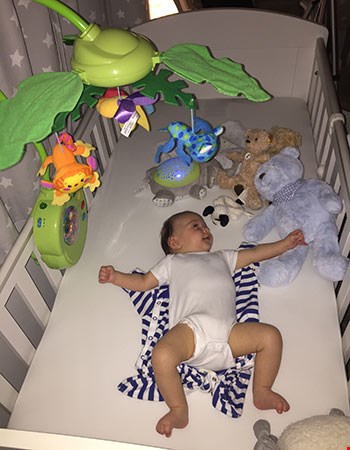 Anyway, back to the NCT lunch. We’ve had a few meet-ups since our little ones arrived but this was by far the best attended. Out of eight couples, seven could make it. All adults and babies were resplendent in a mixture of  novelty Christmas jumpers and onesies and spirits were high. It was fantastic to see everyone – babies and parents – looking so well.

Despite some tough nights, everyone is so obviously LOVING parenthood. To see how far we have all come since that first meeting all those months ago is quite something. Back then we – especially the dads-to-be – had literally no clue what we were doing. To an extent we still don’t but we’re all putting in the hours to get better every day.

The babies were all very well behaved, despite being passed around the group as we took it in turns to eat. That is, until our son burst into tears when we tried to put him down for a nap in his car seat. I don’t know if there’s some kind of science behind this but it seemed to set off a chain reaction – or baby crying dominoes as we dubbed it. 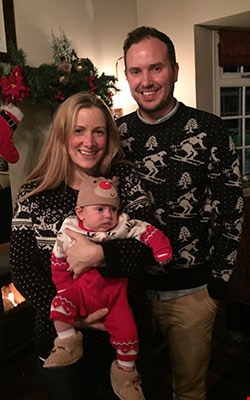 To be fair to the babies it didn’t last too long and in general they were all well behaved. I might have said it before, but the NCT group has been such a wonderful thing, especially for my wife. If any of the other seven couples are reading this – it seems like as good a time as any to say a big thank you for being such a great support to us both. I can’t tell you how valuable and helpful it has been to have you all there.

The other thing I must mention is the successful buying of the Christmas tree. I was every bit as diligent as I thought I would be and we struggled to find the one. After a bit of bartering, we left with a beautiful pine that was 7 ft 6 inches in the back of my dad’s car. As predicted, neither me nor the baby were required during the decoration process – and I think you’ll agree that it looks all the better for it!

Now, I must go and sooth a crying baby. It’s almost 7pm and the really testing time in our new routine is beginning. To ensure he’s nicely tired by bedtime, we try and keep him awake from 4.30ish but by 7 he’s so tired and ready to sleep – and that brings on a fair few tears.

All that remains is for me to wish anyone reading this a very happy New Year from the Bland family – and we’ll speak again when it’s all done and dusted.