This New Year’s Eve The Bland’s found themselves celebrating with a different kind of bottle.

I’ve always looked forward to New Year. I’ve never been one for going to bars or clubs but there’s no better way to get over the post-Christmas funk than enjoying a good house party with close friends and a few bottles of something nice. This year was very, very different in many respects but it’s fair to say bottles remained just as important. The thing is though, this year it was all about bottles of milk rather than bubbly!

That’s not to say that we didn’t indulge in a bit of the fun stuff during our big night in – but to make sure we had enough breast milk to cover New Year’s Eve there was some pretty intense expressing going on for a couple of days before. Research and anecdotal evidence on whether drinking really does affect breast milk seems to be unhelpfully mixed but we thought it was best to make sure Freddie had plenty to make sure mummy could relax. On that note, we read some fairly compelling research which did seem to suggest that actually, very little alcohol makes its way into the breast milk but I’ll leave that for you to decide.

Back to that big night in. After we put the little man to bed around 7-7.30ish my parents came over. I think they had better offers than a night spent talking in hushed tones and dashing upstairs every ten minutes to turn off the sleep alarm – more of that later – but I’m pretty sure they had some sympathy for their poor housebound son. As it happened, mum put her back out at about 5pm so a short trip around the corner and a quiet night in was about as much as she could manage.

As always, New Year is a real time for reflection – and a time to look forward and look back. 2015 has been a heck of a year for our little family and there are no prizes for guessing what the highlight was. Becoming parents has been a rollercoaster ride of challenges and wonderful highs for both of us and I’m sure 2016 will be even better. We were talking last night about all the things we have to look forward to – the first crawl, the first words, the first steps. I guess the first steps will bring about a whole load of new challenges but that’s probably what I’m looking forward to most. 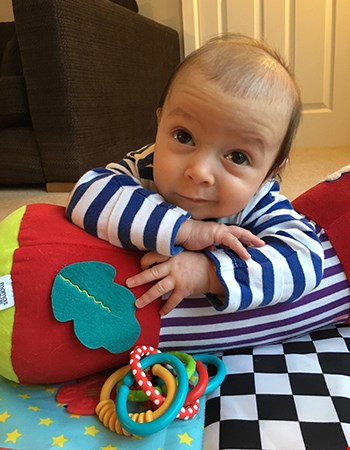 To that end we’re trying to encourage Freddie to do plenty of ‘tummy time.’ Apparently it’s very good for their core strength and motor skills and the competitive parent in me is desperate for my boy to be walking and talking as soon as he can. But all of that comes back to something I’ve talked about before. Babies all develop different skills and attributes at different speeds and you need to keep in mind what yours DOES do rather than what he or she doesn’t do.

A pal of mine at work is due to become a father any day now and he asked me the other day for a couple of top tips for getting through the first weeks and months. Two things sprang to mind. Firstly, buy a nappy bin. In those first few days and weeks we changed more nappies than I could possibly imagine and having somewhere convenient and secure to contain the mess was essential.

The second thing I told him was that if I could have my time again, there is no way I would buy a monitor with a movement sensor. Our monitor is attached to a pad that sits underneath the cot mattress and the idea is that if the baby doesn’t breath for 20 seconds an alarm goes off. What a great idea, I hear you shout. No. Our health visitor said there’s no evidence that they help prevent Sudden Infant Death Syndrome and all they do is promote anxiety – I think perhaps as a parent you can know too much.

The other problem is that on some nights, the alarm goes off every ten minutes. I don’t know if Freddie is a particularly light sleeper or if the pad has trouble picking up his breathing through the mattress but for whatever reason, the alarm goes off. The first few times it happened we rushed into his room in a state of panic only to find him sleeping peacefully. Now I worry that if anything did happen, we would just amble in expecting it to be another false alarm. Something akin to the boy that cried wolf.

As my mum said, back in their day, they didn’t have any fancy monitors and somehow our generation of children managed to survive! On that note, I’m off to bed. It’s about 11.30pm and Freddie has just stirred… I know that because the monitor just flashed on.