Behind the boots…getting to know Simeon Jackson and Jason McCarthy

We sat down with Walsall FC defender Jason McCarthy and striker Simeon Jackson to grill them about all things football, on and off the pitch!

First up was Jason… 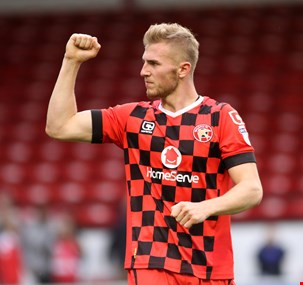 When did you decide that you wanted to become a footballer?

I knew I wanted to become a footballer from a very young age. Most the men in my family are big football fans so it was always going to be the way. I used to go and watch Southampton and Liverpool as a young lad, so football has always been in my life.

What’s the best thing about being a football player?

It’s definitely being able to come in and do something you love everyday. It doesn’t feel like work. I know I’m really lucky to be able to keep fit and kick a ball around for a living.

I think I have a will to win and a desire to do whatever I can to succeed. I work as hard as I can everyday and try to be the best player I can.

Who would be in your fantasy team?

Who do you get on with the best in the team?

To be honest, all the lads have been brilliant since I joined. Scott Laird is a top guy and his experience is something I can definitely learn from.

What’s your most memorable goal?

I scored a late winner for Wycombe last season in the derby with Oxford. It was such a big result for us because it meant we went into the automatic spots and the feeling to score that goal was amazing.

Steven Gerrard. He’s my childhood hero and an inspirational captain. Such a hard working professional and it’s not a coincidence that he went on to achieve everything he did.

Favourite sport aside from football?

Boxing or cricket. Took part in both of them to a decent standard when I was younger.

If you could play for any team aside from Walsall – which one would it be?

I’m from Southampton and came through the academy system there. I captained the U21 side a few years ago and made my Premier League debut there as well, so if I can forge a career back at Southampton at the highest level then that’s what I’d go for.

I’m really enjoying my time here. It’s a great club, a real family based club and I feel like I’ve settled in well. The gaffer has been brilliant with me since I joined and gives me advice. He makes me feel like I can express myself. I’ve played every minute so far this season, in a few positions and I’m just happy to be playing regular competitive league football.

I just want to keep playing and improving as a player. I’ve played at League Two and League One level now and learnt a huge amount already. If I can keep playing, stay fit and healthy, hopefully I’ll have a long and successful career.

After grilling Jason, we decided to put Simeon in the hot seat! 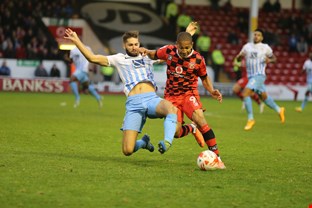 When did you decide that football was the career you wanted to pursue?

When I saw Man United on TV under Sir Alex Ferguson. The Dwight Yorke, Andrew Cole and David Beckham era was just amazing. I knew that football was for me.

What’s your favourite thing about being a football player?

The feeling you get when you put your kit on and go out to play in front of people. Everything about the game. Coming in to work everyday doing something you love.

What do you think is your one strength above other players?

My mindset from a very young age was that I believed I was going to get to where I wanted to be and I didn’t care what I had to do to get there.

If you pick anyone who has played football, who would be in your fantasy team?

Closest friend on the team?

Franck Moussa, we started getting to know each other when we were house hunting at the same time.

What’s your most memorable goal?

When I scored at Wembley for Gillingham in the play-off final, 93rd minute.

There are two for me – Luis Ronaldo and Andy Burgess, who was class at Rushden and Diamonds.

Favourite sport aside from football?

NBA Basketball, I followed the LA Lakers growing up.

Having played for League Two clubs all the way through to the Premier League, which did you enjoy the most and why?

Playing in the Premier League, which is the highest tier, every week there were exciting games, and we had the chance to visit different grounds.

If you could share one tip with aspiring, young footballers, what would it be?

Never doubt yourself and get through the tough times. You’ll eventually make it.

A guide to starting uni