Be careful what you wish for

From rugby rivalries to rolling back to front, read all the latest baby news from The Blands.

My sister, who’s always at the top of her game when it comes to offering sage advice, said to us a few weeks back, ‘be careful what you wish for.’ We’d been willing Freddie to roll over for the first time – front to back or back to front, it didn’t really matter – because that was the next thing on his developmental list.

We just wanted to see some sign that he was getting strong enough and co-ordinated enough to roll over, that would then lead on to crawling, to walking, etc etc. But her point was that babies are much easier to handle when they stay EXACTLY where you leave them. We laughed it off. Fast forward a couple of weeks and this happened. 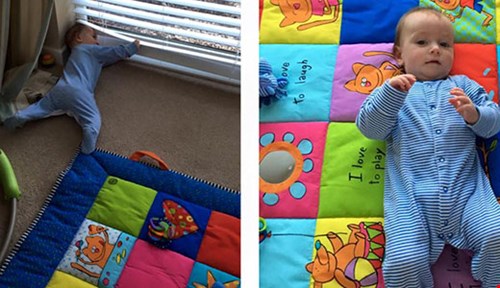 Rachael laid the baby on his playmat in the lounge and walked out of the room to get a drink. She was away for no more than one minute but when she returned, Freddie was a good seven feet away from where he had started and was playing with the blinds that hang on our lounge window.

No danger this time – but it was a stark warning and a reminder of how fast he’s growing up and that our lives are never going to be the same again. In the space of a few weeks Freddie has gone from being fairly immobile to a 15lb bundle of perpetual motion.

And it’s going to get worse. How long before he’s crawling, then walking, then running? It could be as little as a three or four months before that daunting journey begins. But even now, all of a sudden he’s interested in everything. If he can’t get it into his mouth, he’s studying it intently.

Don’t get me wrong, it’s incredible to see him change and grow and learn right in front of our eyes but… it’s frankly terrifying at the same time. Until you have kids you never even consider what direction pan handles should face on the hob. Now I’m making a conscious effort to use the back hobs and not leave any handles sticking out for little hands to grab.

It’s quite a change and brings into sharp focus just how everything has changed in the space of such a short time. My job list for this weekend now includes dropping the cot mattress down a notch or two. But like I said, it is incredible to watch him grow and learn new things every day. He’s started to make sounds that could be confused for actual words. I don’t think he associates any sounds yet and I take absolutely no pleasure from the fact that his favourite thing to say is ‘dadadadada.’

We’re also planning on giving our food blender plenty of attention this week – because this week, we began weaning. Just one puree’d food per day at the moment but so far we’ve got through sweet potato, carrot, butternut squash, pear and, the only one that did not go down well, apple. As I write this I’m told that parsnip is a big hit too! It’s amazing how messy a baby can get eating such a very small amount of food! But that’s just another step on the road to help a very special little man grow into a fully functioning person.

On a totally unrelated matter, baby rugby wars began again this month in the Bland household. Rachael is Welsh but as a proud Englishman I always imagined my son following in my footsteps and supporting the Red Rose. Rachael – obviously – doesn’t feel the same and as England and Wales clashed to decide the fate of the Six Nations at the weekend, the question was raised again. Who decides – or how does HE decide – where do his allegiances lie when it comes to international sporting teams?

It first came up very soon after Freddie was born. He was only ten days old when Wales and England met at Twickenham in the World Cup – and even though Wales might have sneaked a (lucky) win, I considered myself the day’s real winner because my boy watched the game on my lap wearing an England sleepsuit!

It’s a tough one but obviously I’m hoping he follows daddy’s lead despite the best efforts of mummy and grandma! Maybe we’ll encourage him to play cricket so he can represent the England and Wales Cricket Board.