Babies and budgeting doesn’t often go hand in hand. With a little careful planning you could create a baby budget to help you save a little along the way.

I’ll be honest, it’s not something we’ve always done very well. It’s been a little bit ‘as and when’ thus far. BUT, looking ahead to 2017, there’s plenty we can predict and plenty we can plan for.

Classes are a brilliant way to give your child a bit of socialisation, a great way for parents to meet other parents and a quick and easy way to do some damage to your bank balance. Fred does Rhythm Time, Turtle Tots swimming lessons, Tumble Tots and I’ve just signed him up for Little Kickers, his first football class, which will start when he reaches 18 months.

They’re all brilliant and Fred (almost always) loves them but they are expensive. I guess the only advice would be to choose them carefully and remember that, ultimately, they are for the benefit of your little one. I know people who have persevered with a swimming class when their child hates it every single week and to be honest, I think that’s probably a waste of everyone’s time as well as mummy and daddy’s hard earned cash.

Everyone knows that to send a child to nursery for any more than 10 minutes involves taking out a new mortgage. We’re lucky to have my parents just a short walk away so they take on a huge amount of our childcare when Rach and I are at work.

At the moment Fred doesn’t go to nursery but that’s something that we’ll be looking at this year because I think the argument for the benefits of nurseries are pretty compelling – and that means we’ll have to find between £50-£80 a day. It’s pretty steep so I guess it’s a case of balancing out where you can make a saving against the benefits.
It’s also worth knowing when the government’s free childcare kicks in. Generally, it’s when a child is three. All three to four-year-olds in England can get 570 hours of free early education or childcare per year. It’s usually taken as 15 hours a week for 38 weeks of the year.

Some two-year-olds are also eligible but that depends on things like whether the parents receive income support, job seekers allowance, that kind of thing.

My dear wife has a great many wonderful qualities. Sadly, being thrifty when it comes to buying Fred’s clothes is not one of them. As for many mums, she takes almost as much pleasure in what he’s wearing as she does with her own outfits.

The problem this year is that everything is only going one way cost-wise. As Fred gets bigger, the generic baby grows and vests are becoming more and more of a distant memory and now I keep finding the ‘what’s new in’ pages of the Joules and Boden websites open on her tablet. I think the thing to keep in mind is that they’ve near enough outgrown every item of clothing by the time you’ve arrived home from the shop so perhaps spending a fortune on items to keep ‘for best’ isn’t the best idea.

And don’t get me started on shoes. Fred’s feet were a slightly unusual shape in that they were quite long and narrow so when we bought him his first pair of shoes, we didn’t have a huge selection to choose from. They’re all a similar price but nevertheless it’s still fairly upsetting to pay £35-£40 for any item that’s only ever going to last six weeks!

Of course, when it comes to food, we’re forking out a huge amount for stuff that lasts just a couple of minutes. Fred is pretty much a fully fledged eater now. He’ll often join in with family meals, eating bits and bobs of the same food that we’re eating.

That means that batch cooking is fast becoming a key money saver for us. Making vats of bolognese sauce or chicken casserole and freezing it in small portions is a fantastic way to save a bit of cash and make sure the little one is getting some good food.

Going meal to meal is only going to end one way; at a high end supermarket, hunting down those baby ready meals that cost about £3 a pop. Not a smart plan.
Try and do your shopping weekly or even monthly and plan out meals for your little person. And when you do a big shop, look out for…

Bulk buying nappies is THE only way to go. I think Boots had an offer on recently where you could get 76-ish nappies for not much more than it would cost to buy 30-something in other shops. There’s always a nappy deal on somewhere – you just have to find it! 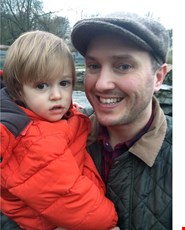 We went to the zoo last week…..it cost almost £50 for the three of us to get in. It was worth every penny for the look on his face when he saw the orangutans but that’s not the point. It’s a lot of cash so look out for deals, like late entry rates. If your little one is anything like Fred, their attention span probably isn’t up to a day out anywhere so just an hour or two will do and if that saves you half the cost then all the better.

Holidays are a tricky one because it very much depends on where you set your sights. Before Rachael’s cancer diagnosis we were booked to go to Dubai but we’ve had to shelve that because it clashed with chemo session number two. We wanted to get a nice holiday in while he was still small enough to a) not require a ticket and b) be controllable on a flight. I think when we have to pay a full fare for him it might mean UK holidays become suddenly much more attractive!

So there you go. If you’ve got this far I imagine you’ve guessed that I’m using a great deal of guesswork myself. As has been the case since Fred was born, we’re learning as we go!

How to deal with loss of electricity

How to insulate your home

How to insulate your home