Long before the patter of tiny feet came along The Blands had a baby of a different kind. 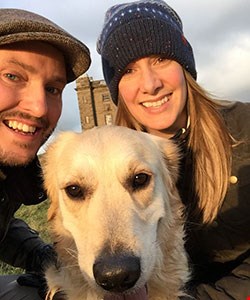 Pre Freddie, our number one child was of the furry variety – our golden retriever Bodie. Spoilt rotten and lavished with attention, bringing a baby into our perfectly balanced family of three was always going to cause a fair bit of upheaval for him.

But having both grown up around animals ourselves we were really happy that Freddie was going to have a top dog as his best mate. It’s a delicate balancing act introducing a baby to a dog and vice versa – but there’s plenty to be gained for all concerned. The last thing you want is for your child to grow up with an irrational fear of the next door neighbour’s family pet.

So here’s our advice for lots of smiles and waggy tails:

It really helps if you have a ‘bomb-proof’ breed of dog. Golden retrievers are known as great  family pets as they are so patient and gentle. That’s one of the reasons we chose a retriever, knowing we’d be starting a family before too long. My parents are now on their third Golden and the dogs put up with all sorts from me and my brother.  We are lucky that Bodie is particularly gentle – he will need to draw on all of these qualities as Freddie grows bigger and  ‘grabbier’. I haven’t had the heart to explain to him yet that he has a lifetime ahead of being  dressed up and dragged around by his little brother!

As much as we trust Bodie we never leave the two of them to their own devices. You just never know what can happen so it’s best not to risk it!

3. Be prepared for extra work

Having a dog and a baby is basically like having two children. They both have needs and won’t hesitate to let you know when they want them met. There’s no chilling out at home on rainy days for us. Bodie will pester until he gets his walk so, be prepared to wrap your baby up, get a large umbrella and head out to the fields. At least the extra walking is good for shifting baby weight! You also have to become even more of an expert at multi tasking.  It’s like Bodie WAITS for the second I sit down to feed Freddie before whining at the back door to go out…

4. Your dog will hate it at first

It’s entirely likely the dog will go into a bit of a depression once baby comes home. We had our  happy unit of three with him at the centre of it. Then suddenly this screaming thing becomes the focus. You just have to give your dog as much attention as you can so they don’t feel too left  out for long.

5. But… it all gets better at weaning time!

Bodie is getting over not being top dog anymore as weaning has started! I believe the two of them now collude to share food. In my head the conversation goes something like this… BODIE: “What doing?” FREDDIE: “Mushing toast. You play?” BODIE: “UH-HUH!!” *Freddie flings toast fingers on floor… Bodie rushes in.* The only down-side is that now Freddie is on three meals a day, a lot of food hits the deck and  Bodie’s harness is getting a bit tight!

6. The first time your baby laughs at the dog…

Is a proper heart melter.  Now Freddie is 6 months old he watches everything Bodie does and  laughs if he’s rolling on his back or rushing around having a ‘funny 5 minutes’. He reaches out  for him as he passes his chair and it’s just amazing to see them starting to bond. 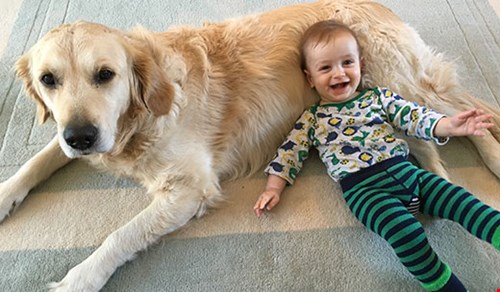 7. Get a good all-terrain pram

You don’t want all your dog walks confined to the pavement when it gets wet.  There’ll be none  of these pretty delicate prams and pushchairs for you.  You need the 4×4 of the buggy world,  capable of trawling through mud feet deep.  It’s also worth investing in some good kit for cleaning it too so you’re not frowned upon the next time you take your filthy pushchair into a  pretty little coffee shop…

8. Don’t get too het up about germs

In my opinion, it is a good thing for babies to get used to doggy germs. Especially if they’re going to be growing up in a house together. Recent research has shown that children who grow up in a home with a dog are less likely to have asthma. There’s something called the ‘hygiene  hypothesis’ that children who are brought up in overly sterile environments don’t get exposed to enough germs. So let them both get involved and try not to have a heart attack when the dog  licks the baby’s face (Freddie thought it was HILARIOUS) it’s actually helping to build their  immune systems!

As we’ve said, a new arrival is likely to cause a fair bit of anxiety for your canine companion so be careful when introducing them for the first time. Teaching kids that dogs, however cute, cuddly and calm they seem, can be unpredictable is essential. But please, please, please don’t encourage fear. So for now we have reached a harmonious status quo with Bodie now loving his little feeder friend. I suspect he may not be so enamoured when the brave new world of crawling and walking begins soon and he finds a small boy clutching his tail 24/7… but we’ll see!