Potatoes are one of the easiest vegetables to  and traditionally, Easter is the weekend to plant them.

Easter is here, Easter is here! An excuse to eat chocolate for breakfast whilst gazing at fluffy ducklings and baby bunnies. Or a reason to plant potatoes. Truthfully I’ll do both, but I don’t think you want to read about my current lop-ear, lion-headed bunny rabbit obsession.

Traditionally, Easter is the weekend for getting your potatoes in. The early birds may have already got their first earlies in the ground because they are desperate to eat new potatoes, but the rest of us can catch up this weekend.

Potatoes come in various categories that can be a bit baffling, so here’s the short hand:

I grow a mixture of early potatoes like the delicious Red Duke of York, salad potatoes because I am a waxy potato fiend, and Blight resistant Sharpos, such as Sharpo Mira and Sharpo Axona to store over winter. These last potatoes store so well that I am still eating them as I plant out the next batch. 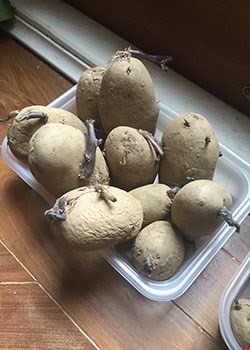 Often potatoes are chatted; this means that they are pre-sprouted before they are planted out. This is done in part because it gets the potatoes to mature quicker. That said soil temperatures in the first few days can have a big effect on how quick it is till you can dig them up and eat them. The trick is to place your hand just under the surface of soil and see how long you can leave it there. If it’s way to cold to keep it there for any time, wait because your potatoes will feel the same way about the soil as your hand does.

Chitting can also effect the size of the potatoes. Whether you chit or not you get the same yield in weight, it’s just that non-chitted potatoes tend to produce more potatoes of a small size. Thus, the thing to take away from this is chitting is a little subjective.

If you like doing it, then chit away, if you think it’s a pain, don’t bother and you will still end up with potatoes.

If you buy seed potatoes this weekend you will most likely find that they are already chitting inside the bag, be gentle with these sprouts because if you knock them off then you reduce the amount of potatoes you will harvest.

You can grow potatoes very successfully in pots or containers or in the ground. A single potato needs about 20 litres of compost, so grow no more than two or three in large patio sized pot. Place the potatoes on about 25cm of compost and then cover them with 5cm or so more.

As the shoots appear, keep covering them potatoes with compost until you reach the top of the pot. Remember to water regularly, never letting the pot completely dry out. Sow early potatoes now and you will be eating them by June, main crops you can harvest in from early August onwards and salad potatoes tend to be ready from early July.

If you want to plant your potatoes in the ground, I find it’s best to treat them like you would a bulb, dig a whole, pop the spud in and cover. You can earth up the potatoes by drawing the soil around them as the new growth appears.

If your potatoes grow too close to the surface of the soil and receive light, they will turn green and poisonous, which is one of the reasons why you earth them up. Or if you have a supply of grass clippings use a thick layer of these. The clippings will break down quickly keeping the soil damp and providing the potatoes with a source of nitrogen.