In late August, Nathan C. of Midlothian, Virginia was on the edge of a very exciting time. He and his wife were just several weeks away from the arrival of their newborn baby girl, and they had finished all the typical preparations, just simply waiting for her to enter the world. But one day upon returning home from work, Nathan noticed a suspiciously large puddle in the cul-de-sac near the front of his home. There hadn’t been any rain in recent days, and his sprinkler system hadn’t been run, either. Soon after pulling in, he came upon a strong and steady stream of water between his grass and the curb that was creating the puddle. 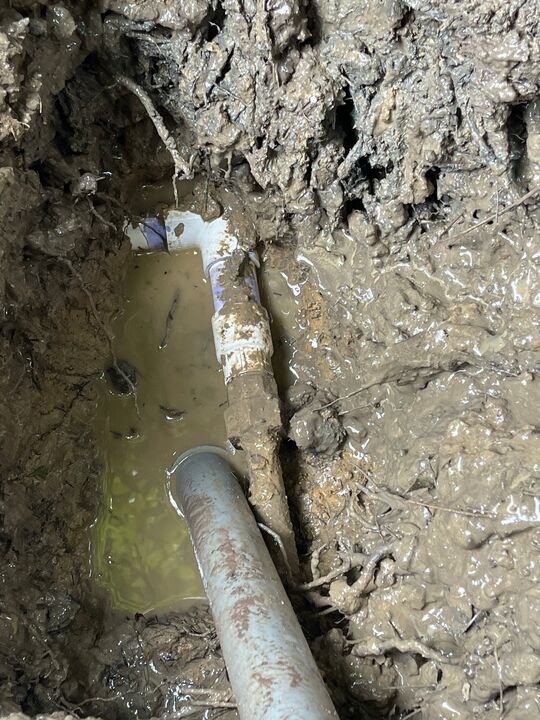 Nathan knew the issue was stemming from a leak in his water line but was unsure if it was on his property or the county’s. So, he started off by calling his county, who directed him to have his sprinkler company come out to ensure the leak wasn’t related to the in-ground system on his property. It wasn’t, so the county came out to confirm there was a leak. Once they did, they let Nathan know that it was coming from his home’s main water line. This meant that it would be on Nathan and his wife to pay for the repair. By this time, more than a week had passed since the initial puddle began, and now it was starting to invade the property. But while delivering the unfortunate news, the county technician reminded Nathan that he may have signed up for a water line policy through HomeServe’s partnership with his local energy company – which in fact, he did – just about six months prior in February 2022.

“For a split second, this situation was extremely tragic for my wife and me. But then I realized that I had a policy through HomeServe,” said Nathan.

“This sort of scenario was what I imagined when I signed up for the policy, and not only did I receive what I signed up for, but the customer service and repair far exceeded my expectations.”

He quickly searched his email inbox for his policy information, and within a few minutes he was on the phone with a HomeServe representative. They connected him with a reputable and local member of the HomeServe contractor network, McAtee Plumbing.

Because of job volume, McAtee Plumbing initially scheduled somebody to come out a few days from then. But Nathan stressed the urgency of the situation – his wife was due to give birth at any moment, and he was worried they’d be in the hospital or unable to use water in their home soon after. McAtee went above and beyond to reschedule the repair date to the next day, which is exactly when the technician, Hunter, arrived.

“Hunter was incredibly patient and understanding, and it was clear that he was there to get the job done as efficiently and safe as possible,” Nathan told us. “He had to dig by hand not to ensure no damage to my sprinkler lines. He frequently paused to show me his method to finding the leak, which he eventually did find and fix with no further damage to my property. Even after his job was done, he stuck around to ensure it was up to my standards because he truly cared.”

When all was said and done, just 18 hours after Nathan placed the first call to HomeServe, the leak in his water line was located and repaired, saving him and his wife the stress of coordinating and paying for the repair on the verge of the birth of their daughter.

“This would have been financially and emotionally debilitating for us had I not signed up for a HomeServe policy,” said Nathan. “From the cost savings aspect to the exceptional quality of service I received from HomeServe and McAtee, the suffering we could have endured was completely eliminated from this experience.”